Istanbul, Turkey – I am seated in a dimly lit hall at Istanbul Modest Fashion Week (IMFW), waiting for the first catwalk show to start.  To the right were three young women in their 20s. With their black hijabs, long trench coats, and modest clothing, they looked more appropriately dressed for school than a fashion event. After a lengthy discussion they said that they were studying medical imaging.

Suddenly, the lights went out and the show started, accompanied by a musical track dominated by distinctive drum beats and melody that can only have been played by a Sufi flute locally known as the ney.

“[Modest fashion] is both useful and challenging. Useful, because it doesn’t exclude any religion. Challenging because it is hard to define and interpret the term ‘modest’.”

First on the podium was a succession of designs from Refka’s natural and sophisticated women’s collection, all ethnic and bohemian designs. This was followed by a collection of hijabs created for Modanisa by one of the rising stars of modest fashion, A-list hijab model Halima Aden. The fringes around the scarves almost danced to the rhythm of the music, captivating the audience. 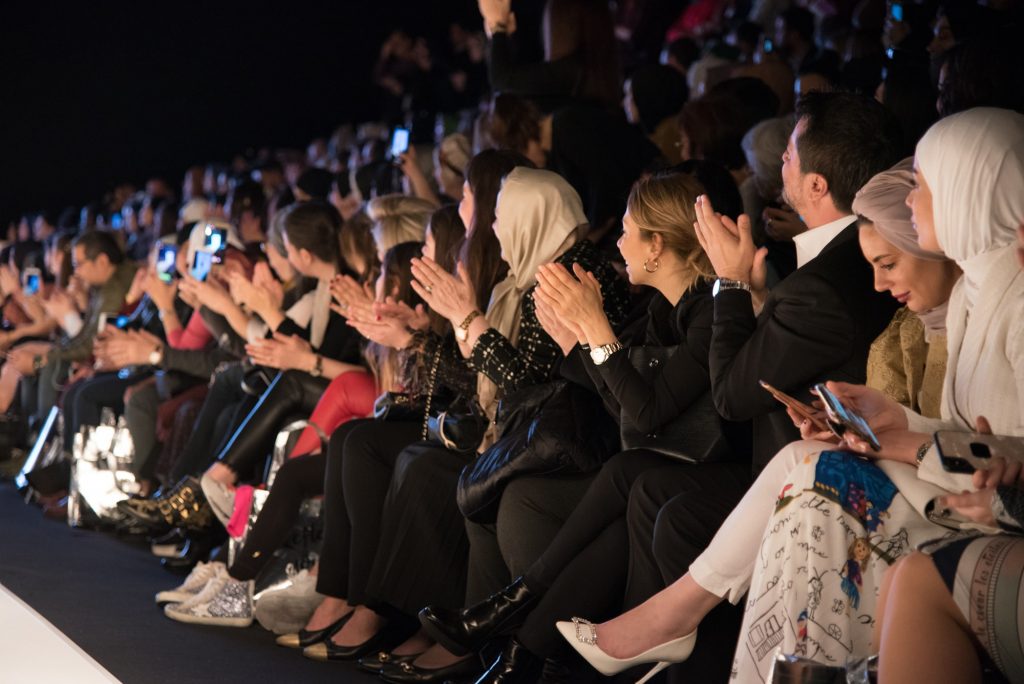 There is no doubt that the overall atmosphere of IMFW was characterized by enthusiasm and joy. Visitors did not fit the stereotypes of hip women often associated with mainstream fashion shows. Instead, the young women at IMFW carried warm smiles and exuded a youthful energy as they took selfies, joked with each other, and enjoyed viewing the various designs displayed at the shows.

The next show exhibited six distinctive collections, including colorful swimsuits by Mayovera, long romantic dresses by Minel Aşk and a casual collection by Rabia Z., whose models were carrying placards with messages about the environment such as ‘Our world needs love,’ or ‘Green is the new black.’ Also sitting at the front row was Jordanian-American film producer Ala Hamdan, who said she had developed an appreciation for modest fashion.

“Style, colors, self-expression through one’s look; these are all nice, however, we should never lose our focus … we have to look and be modest.”

“We believe that every woman deserves to look good, and feel comfortable, regardless of their beliefs,” said Ture. “Our platform recognized and responded to the unserved demand which was overlooked by mainstream fashion. Today, people understand that this need is not merely local, but global, and that it deserves to be honored.”

Aden signed her first cooperation agreement with Modanisa to showcase her designs at IMFW. Her collection consists of 45 pieces of headwear which include fun, stylish, modern, yet traditional and conservative looks.

“Collaborating with Modanisa on my first ever fashion capsule collection, a scarf and turban line, is a bit of a full-circle moment. The turbans being pre-tied makes them ready-to-wear pieces for women on the go. There are sporty looks you can wear even to the gym, to work, or for parties,” said Aden.

IMFW also provided attractive networking opportunities for modest fashion designers, traders and influencers. Dilyara Sadrieva, a consultant based in Moscow, was one member of the industry at the event who was trying to understand how modest fashion concepts varied from country to country and in response to current events.

Sadrieva acts as an adviser to brands looking to penetrate certain markets and said the American modest fashion market, for instance, was influenced by black Muslim women. The country with the greatest diversity in terms of how women dress is Indonesia, but the local modest fashion industry has been unable to gain international penetration because designs are too locally focused, she said. Turkey, on the other hand, is quite diverse and European in terms of its design output, she added.

“True success would be to see the [modest] brands scale up.”

She emphasized that it was important to maintain focus on the concept of modesty when creating new designs: “Style, colors, self-expression through one’s look; these are all nice, however, we should never lose our focus. We should never forget that we dress modestly and we have to look and be modest.”

While it can be argued that the idea of modesty carries connotations of women staying out of the limelight and not drawing attention to themselves, fashion on the other hand is seen as a means of self-expression. London School of Fashion professor Reina Lewis finds the concept of modest fashion “tricky”.

She said: “It is both useful and challenging. Useful, because it doesn’t exclude any religion. Challenging because it is hard to define and interpret the term ‘modest’. This is why we say that there are many aspects, and definitions, of modest fashion.”

However, despite its increasingly widespread nature, modest fashion is still a niche industry.

“True success would be to see the brands scale up,” said Lewis.

Whatever the case, growing international interest in industry events such as IMFW has suggested that the future is bright for modest fashion.

Bio – Zeynep Güven Ünlü is an independent journalist and content consultant based in İstanbul Turkey. Prior to her freelance career, she worked for various media outlets and wrote several hundred successfully published stories on women issues, fashion, culture and lifestyle. She was the Managing Editor of Vogue Turkey between 2010-2017.