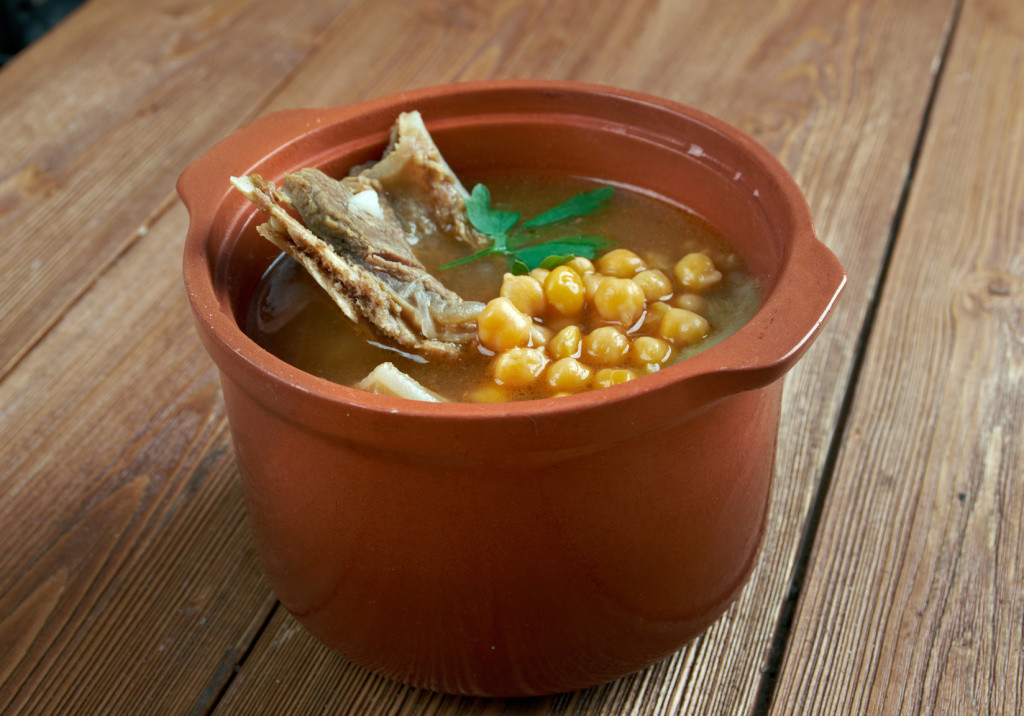 During a family vacation to Iran last winter, I had a chance to treat myself to one of the iconic food in the Persian culinary called Abgoosht  a hearty stew-like dish comprised of  mutton, various beans, potato and spices, slow cooked in crocks, and served in cylindrical stone bowls called dizi. Despite being one of the oldest known dishes in the Persian cuisine, abgoosht remains a rarity on the menu of most popular restaurants until recently.

Ever since coffee houses started serving kebabs, skewered liver, and Hookah more than coffee and tea, some restaurants in Tehran have decided to put abgoosht on their Chefs Special Order category. Not only on menu, coffee houses have transformed from being male-only hangout places to more family-friendly entertainment houses. Some of the coffee house owners have employed traditional Iranian architect to redesign the houses according to Irans ancient paintings and architect in order to foreign visitors a glimpse of Irans hospitable and laid-back culture.

Dizi-sara (dizi refers to a special bowl where abgoosht is served in, and -sara means house) is a high-end restaurant for an old-time food. The place is known for quality, ambiance and ease of access and, my ultimate place for enjoying the semi-home-cooked meal.  Dizi-sara is located at Kalantari Street, Tehrans heart of the business center, typically overwhelmed by crowd. The restaurant is nested in an old brick two-story building, adorned with beautiful mosaic tile over a blue turquoise narrow door.

After spending a leisure amount of time browsing through the artifact district of Kalantari Street, my foodie friend and I arrived at the restaurant late in the afternoon. We were thinking the hustle and bustle of the restaurant must have subsided by then since many of the restaurants guests tend to be businessmen, and their business, to eat abgoosht there. Wrong!

At Dizi-Sara, we were greeted with a big crowd  mostly young male and female city slackers like us in groups of two or more  who were sending their impatient glares toward a middle-aged man sitting behind a pity-looking wooden desk with a notebook open in front of him. We stepped in front of the desk.

Me: Table for two, please! How long before we get in?

Man: Could be 45 minutes. As you see we are very busy today.

Writing down my name and putting a 2 by it, he then handed me a buzz disc  like the ones they hand out at Cheesecake Factory. He motioned us to move to the side.

It was slightly after 3pm that the buzzer finally went off in my hand. I got so happy. I was starving. Passing through the narrow door, we headed down a few steps just to be welcomed by the delicious smell of abgoosht in the air. As we were walking down to our table, I noticed the paintings on the wall depicting Irans ancient royal hunting. A folklore music added extra taste into our hungry appetite. The humble furniture was practical: wooden tables covered with reddish tablecloths along with benches and blue-tiled platforms decorated with matching cushions for more comfort. With the limited space and constant traffic of people moving in and out of the restaurant, the waiters put on an entertaining show of carrying huge trays filled with bowls of food, chutneys and jars of drinks, on one hand while maintaining their balance.

The restaurant only serves lunch. The crowd started gathering by the door well before noon time. On the menu, there is only one dish to order, but I found variety of side dishes like pickled garlic and onion, chutney, fragrant seasonal herbs like basil and mint, cucumber salad and of course a specialty house baked flat bread called Sangak. 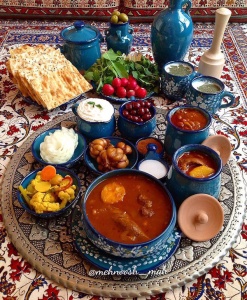 sara, the food arrived on our table in a tall bowl with goosht-koob, a tall pestle with a handle and a round smooth bottom to mash the solids, and a wide-mouthed bowl. This is a dish that requires some biceps workout and rolling up sleeves before fully enjoying it. I held the ingredients back in the bowl with the fork and tilted the stone bowl to transfer the broth to the other bowl. Then I added plenty of bite size sangak bread to soak. This portion is called tilit or dunked bread.

To prepare the meat and beans combination, I worked my way through them by mashing the solid ingredients in the cylindrical bowl with the help of the pestle until well-mixed and then transferred it to a plate. This part is called goosht-koobideh or mashed meat. To put the final touch, I drizzled a generous amount of fresh lemon juice. It was finally time to dig in. And you bet, it was DELICIOUS! There is not really a professed order in eating the tilit and goosht-koobideh but usually the first one is treated as a soup and the latter as the main course.

If you are not sure how to participate in preparing the mashed meat, the friendly waiters at Dizi-sara are always willing to do the honor for you  a fact too sadly I learned quite late, after I made a noticeable mess by leaving greasy spots all over my jacket. Lesson learned for the next visit!

The best way to conclude a good meal like abgoosht was to enjoy a glass of hot tea with sweet bamieh  a Churros-like sweet dipped in rosewater syrup.