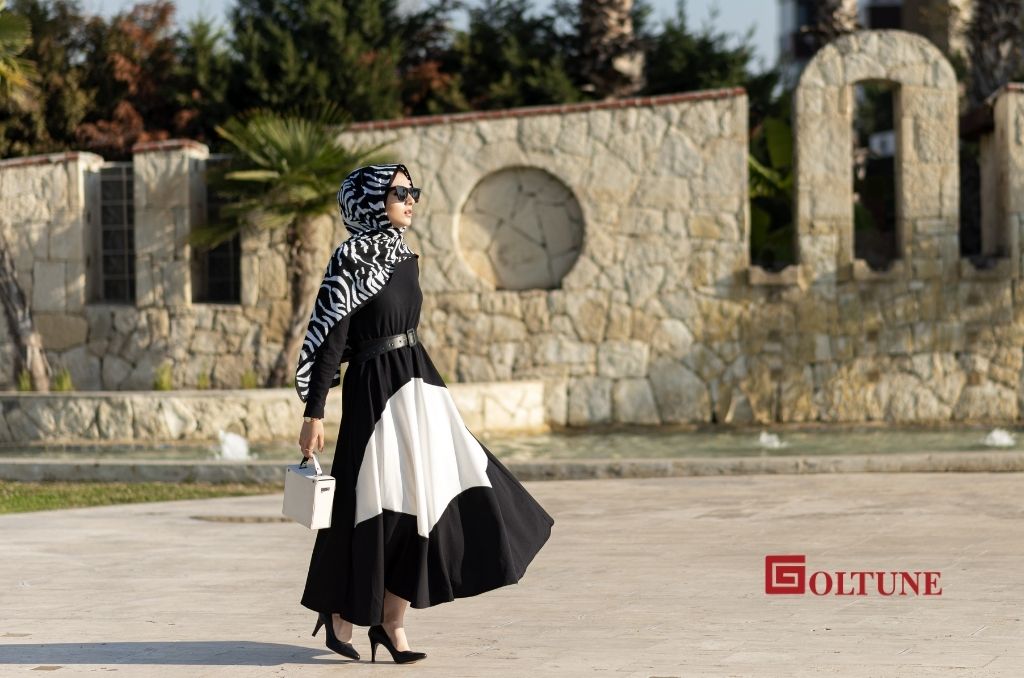 Goltune – With   a nod to the past and an eye for the future, one the Iranian fashion designers remembers miniskirts in Tehran, and celebrates the new wave of designers who are fearlessly reimagining modest fashion.

Iranian-American novelist Saideh Pakravan fondly remembers walking the streets of Tehran in a thigh-high mini skirt. In fact, that was a typical look for her, and only on a few occasions did she receive a pinch on the bottom out in public. “That was pretty much the norm in all Arab countries,” says Pakravan, who now lives and writes in McLean, Virginia.

Pakravan is the author of novels The Arrest of Hovegda: Stories of the Iranian Revolution and Azadi, Protests in the Streets of Tehran.

“There is no way to push women into submission”

Prior to the 1979 Islamic Revolution that ousted Shah Mohammad Reza Pahlavi, that’s just how it was. Miniskirts were all the rage and no one thought twice about bikinis on the city’s hot beaches. “Of course, it wasn’t for everyone, but lots of people in the streets dressed like this. We bought magazines and shopped off-the-racks and at boutiques,” says Pakravan. 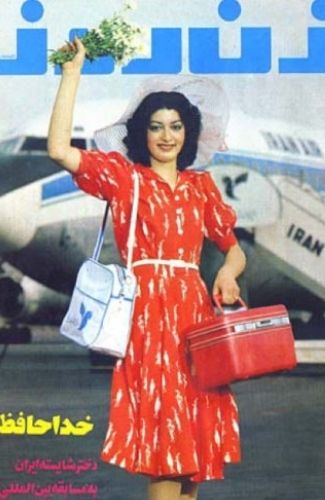 In the days of the Shah middle bourgeoisie and upper-class Iranian families were completely Westernized. They traveled the world and purchased designer clothes. Meanwhile peasant women tending the fields and farms assumed attire that was more modest and traditional, although still suitable for work.

Women in rural regions chose colorful, practical pieces but couldn’t be hindered by the chador. Those clinging to the lower echelons of economy often donned more traditional vestments; such as a flowing white headpiece adorned with flowers. “Before 79,” Pakravan says, “very few women wore the black chador.”

Things are a bit different now. One must work his or her way around the state’s idea of a suitable hemline.  “The people remain creative. They are very gifted designers,” says Pakravan. She calls Iran’s new wave of fashion “paying lip-service to acceptable standards.” If nothing else, it would seem that Iranian women do love a challenge.

A number of Muslim designers view modest fashion as more help than hindrance, as one must consider how to work with it, and around it.

In any country fashion has an uncanny way of mirroring (or mocking) politics. During the 1930s in the United States, Roaring Twenties hemlines fell right along with stock market dividends and the collective American, and later global, spirit. In the 1970s when women stormed the workforce alongside their male counterparts, pants suits practically sprinted off the shelves.

Iran has its own storied fashion past, defined in no small part by shifting political gales. Despite this constant state of upheaval, or perhaps because of it, talented designers persevered and many women never gave up on the pursuit of creativity and self-expression through clothes. It makes one consider: what comes first “fashion or reform?

The region previously defined as Persia always had a strong sense of style. Beautiful Empress Farah Pahlavi appeared dignified and womanly when she donned popular designer Nini Jahanbanis embroidery-rich gowns of the late Sixties. And of course women of means were quick to follow suit. Jahanbanis pre-revolution designs were inspired by Baluchi motifs from the province of Baluchistan in southeast Iran, near the Pakistan border. Nini designed evening gowns and blouses for those who bothered with fashion, says Pakravan. It was very discreet, very subtle.

With Ayatollah Khomeini and 1979 came covered heads and modest clothing statutes written to uphold conservative sharia ideals. At this time a number of Iranian designers sought opportunity or escape in Europe and the U.S.. Many of these designers found homes and establishing careers in L.A. and Southern California. Still other stayed and sketched patterns befitting of the new Islam. 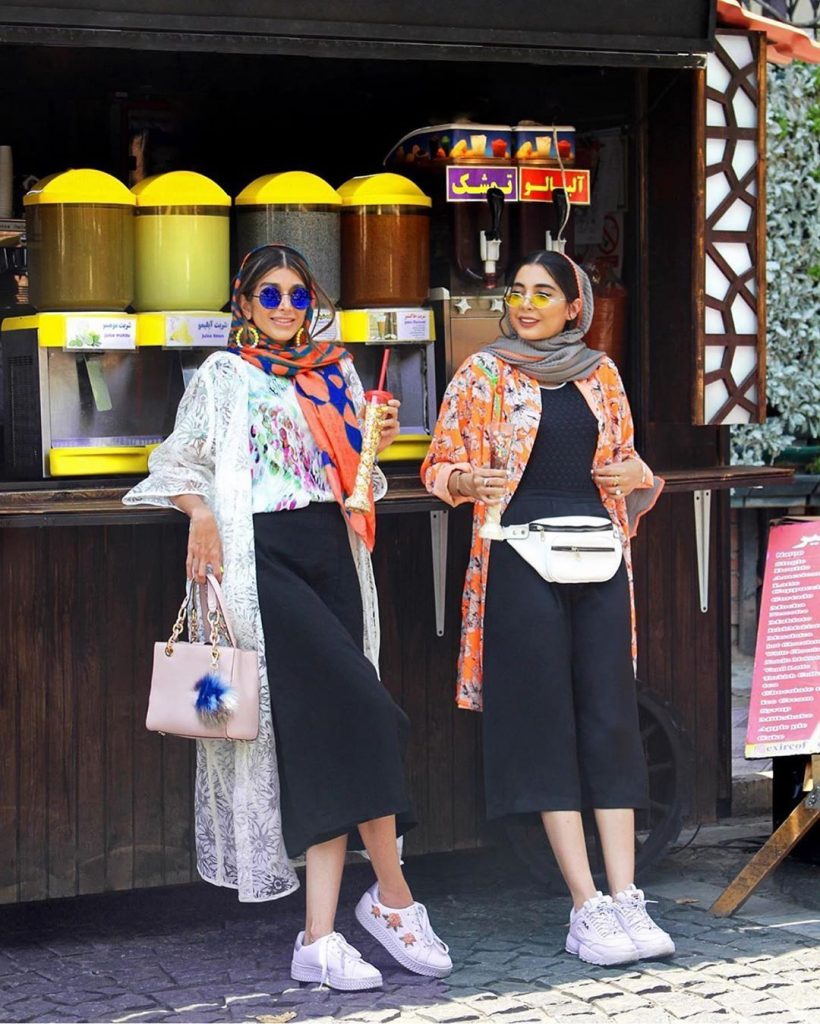 In the past thirty-some years the country has had no shortage of talent, nor evidence of a dying industry. After all, Iran has seen the likes of Shadi Parand, Shirin Guild, Massoud Ansari, Michael Soheil and an ever-growing list of skilled craftsmen and women.

The reality is modest fashion has many faces. A number of Muslim designers view it as more help than hindrance, as one must consider how to work with it, and around it. It can be a factor of distinction in a sea of cookie-cutter couture.

American designer Yasmina Johnson of Inner Orbit Systems finds it “refreshing” to see true Muslim attire going mainstream. “You can’t afford to ignore this type of fashion for long,” she says. Johnston recalls the struggles she had in the past trying to find a formal dress to wear to a wedding that still said “modest hijab” in a modern world. To do so (and do it well) requires a little finesse and a lot of creativity. But the results, she says, can be exciting.

“I see a lot of Muslim girls dressing way more fashionably than a lot of girls that I see at (fashion) industry parties, because (all those other girls are) dressed in the same way. These Muslim girls have to be innovative; they have to be creative and calculate everything. Someone that has that type of mentality; they’re going to wear something that’s badass” Johnson said. 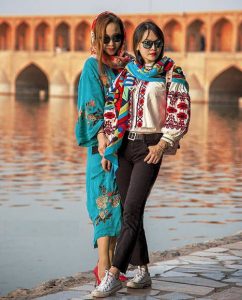 It’s true designers in Iran have the biggest challenge of all. But maybe it all depends on how you look at it. Perhaps Shadi Parand said it best in when she said Iran is a “very simple and complicated world” in regards to the inside-outside fashion lives of women. Instead of feeling defeated or stifled Parand embraces modest guidelines as a challenge, and is perfectly intent on breaking or bending laws, while still celebrating a rich and colorful Iranian modest fashion.

This is evident, too, when one looks at Farnaz Abdoli and her new clothing line Poosh. Abdoli reimagined the simple manteau and came up with a joyful collection of street clothes that are “technically compatible with state dress codes.” The head-to-toe ensembles have an air of remarkable freedom and ease. It is a feast of modern layering, bright colors and Bohemian, Eastern-inspired prints. Each carefully executed outfit “from top to bottom” is no doubt something any woman would adore.

“There is no way to push women into submission,” Pakravan muses. “Fashion is very much a political statement that says ‘This is who I am’”.