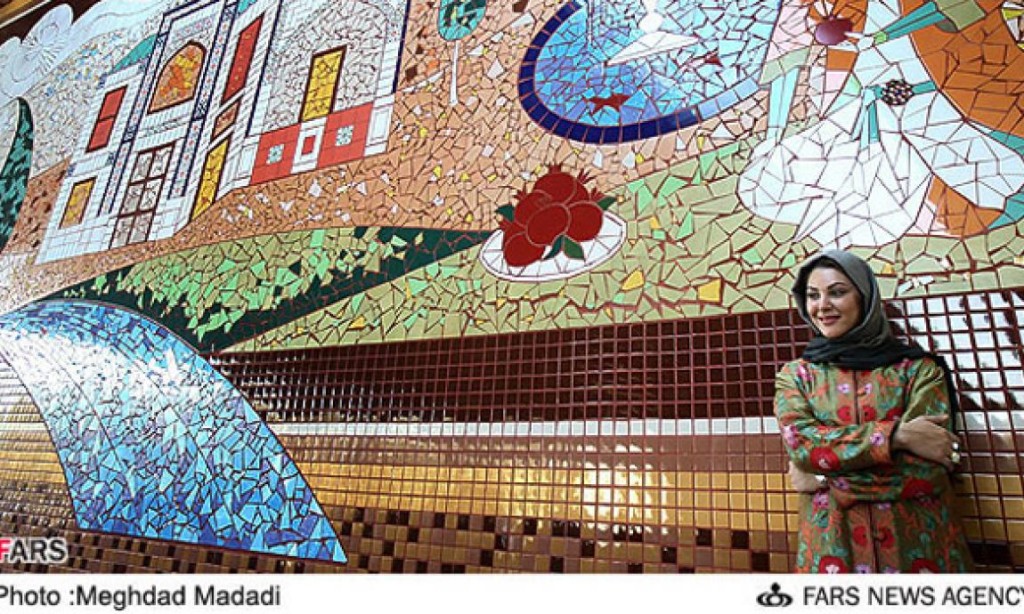 Iranian artist, photographer, and actress, Laleh Eskandari has a mission, she wants to beautify walls of Tehran, Capitol of Iran. Her wall murals, which mainly depict Iranian motifs, have transformed the once boring sidewalls of Tehrans 6-to- 8-line of highways into all-year-round art exhibitions providing eye pleasing sceneries.

Born in 1975 into an art loving family, she traces the initial sparks of attraction to visual arts back to the days she spent hours in her grandfathers workshop  a room in the attic where he kept his patterns, designs and paints.

It was a magical place for me and I couldnt wait for him to leave so I would sneak in to play with the tools and paints. she said.

To follow up with her passion for visual arts, Eskandari chose graphic design in college. There, she was introduced to a new technique, a subsidiary of sculpting  a type of fresco. With the limited tools  hammers, tongs and chassis, she was able to finish her first project in 2 months.

Handling tools, dirt, and plaster never leave a friendly workplace for female artists. Yet, Eskandari decided to execute a large scale work, and bring it to the city space.

At the time, there were 2 wall murals that despite their somewhat pleasant appearance lacked technique and delicacy, she said.  In those wall murals, you could clearly see the separating chassis lines which rubbed the work off of its delicacy. But the mosaic murals we have installed look like a 500-meter one-piece frame.

The unveiling of her first wall mural was big hit. Even neighboring countries invited her to deliver similar projects. 

Weve had offers from Samarkand and Bukhara in Uzbekistan and Tajikistan where once were part of ancient Persian Empire. Since we share a cultural background with them, it just seems very natural.

The tile mosaic art in Iran dates back to pre-Islamic era when they used stones extracted from mines, gave them square shapes and with their limited colors, they created murals for particular places like palaces and temples with relevant motifs to portray kings life and religious ceremonies, for instance. Back then, such artistry belonged to only novel and upper class families.

Now, Eskandari delivers the same art, only in its modern platform, to the public. In her workshop, the mosaics are placed on the chassis to be transferred to the sites for wall applications. They are all heavy materials.

Eskandari is trying to give Tehran a face-lift to wash away the dull gray colors to familiarize the masses with Iran’s rich heritage. Some of her inspirations come from Iranian miniatures to be used for her gigantic wall murals.