This rite would start with me waking up my dad at around 5 a.m. on election day, which always fell on the weekends. He knew he had to commit to driving me down to south Tehran. I never woke up before 9 a.m., 10 a.m. or sometimes 11 a.m. on the weekends. So, there would have to be a very special reason why I would wake up at 5 a.m.

Dad would get ready quickly and get into the car. I knew we had to stop by a bakery close to my grandma to buy special bread for her. He would also stop by a grocery to buy her favorite cheese. It would be almost 6 a.m. by the time we would arrive at her house, and our ensuing conversation would go something like this: 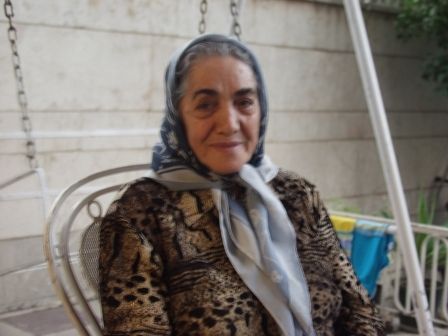 After the revolution, many of the religious women in my family put away chador, a long back garment to be worn around the body. They replaced it with modern-looking attire. They would wear a maunto, a long robe, and scarf outside. My grandma had a comfortable dark blue cotton maunto, robe, along with a shiny green and blue silk scarf. My mom brought the scarf for her from London. I helped her to put on her maunto and scarf.

My grandaunt’s house was not too far away – less than half a mile. We had to go through a few narrow alleys to get to her house.

It was an early June morning. The smell of fresh fog was in the air. A soft morning breeze was brushing our face. I loved walking with my grandma. She was a very strong woman with great charisma. She moved about 15 people in her family, including her sisters and brothers, from a remote village in North Iran to Tehran. People in our family called her “Churchill” for her sense of power, wisdom and authority.

The morning fog was gently disappearing, giving way to Tehran’s sunshine. By the time we were at Grandaunt’s house, my grandma was a bit exhausted.

“Grandma, Grandaunt, and Granduncle, these are the papers you need to have.”

At that point, I would pull out three pieces of folded papers and handed them over to them. I would then tell them the individuals they needed to vote for.

At the polling station, officers would identify voters by their birth certificates – booklets they would then stamp. The next step for them was to take the ballot and cast their votes. Each would go to a quiet place to review the names. I would stand in the corner, watching them.

On the folded papers I gave my family were written the names of reformers and liberals who supported women’s rights. I never missed out women candidates in my list. After each relative was done, they would drop the paper into a special box.

My uncles and their families would show up at around 10 a.m. for breakfast. They had to cast their votes before coming over. They knew I would take them to the polls if they hadn’t already voted. After ensuring everyone had voted, I would ask my dad to take me to my other grandma, my maternal one, in the city’s east.

There were usually 15 people in her house by the time we would arrive – all from my mother’s side and including aunts, uncles and cousins. They would come to visit my grandma on the weekends anyway. But election days were special. The same ritual would repeat there until everyone casted their votes. I never let people eat their lunch before going to the polls.

BUT, there was one person I could never take to the polls – my mother. She didn’t want her birth-certificate booklet get a stamp of the Islamic Republic of Iran. She didn’t like the regime, she didn’t like that she was forced to put on a scarf, she dind’t like the maunto, she didn’t like that her rights were taken away from her after the revolution, she didn’t like everything about Islam and the Islamic republic. I understood her point of view. I shared some of her concerns. However, I asked her if she could put her feelings aside for the sake of the larger picture. I wanted the reformist win. That seemed the best bet at the moment. My mom and I reached an unspoken agreement that we would both remain quiet on election day.

This ritual continued for 10 years until I left Iran. All those years I could never take my mom to the polls, except for one time. It was when Khatami, a handsome reformist candidate, was nominated. My mom loved the way he spoke, the way he carried himself, the way he respected women, the way he distanced himself from the regime’s propaganda. Khatami was the only man my mom voted for. He won the presidency for two terms.

Election days are important days. It is the only day when ordinary people wield the power. I believe that letting politicians off the hook by not voting is irresponsible, irrational, insane and a cardinal sin. We, the public, should never allow politicians do whatever shit they want to do. We must hold them accountable. To vote is just one way to do that.