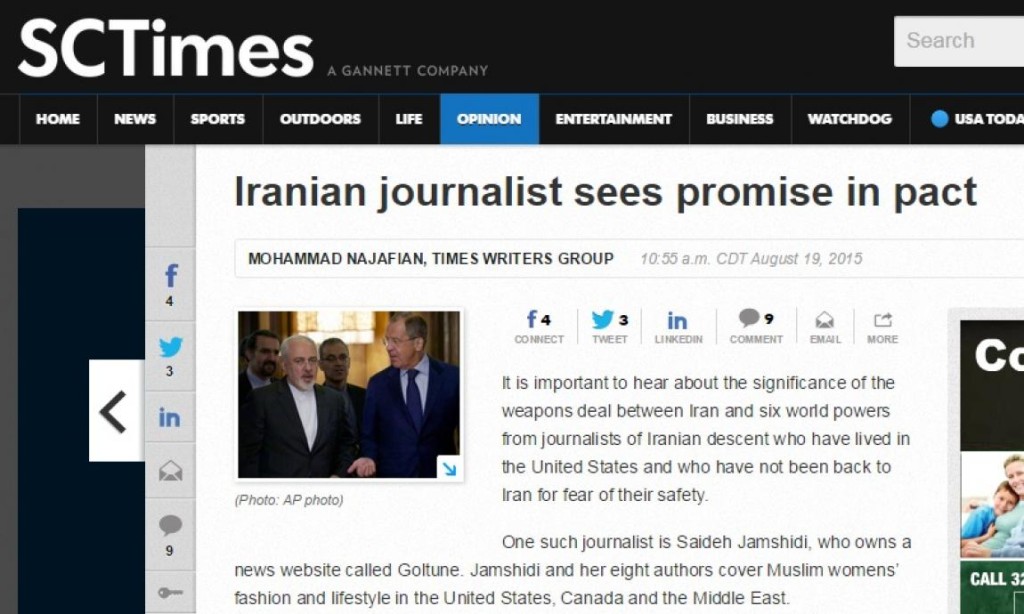 This article is written by Mohammad Reza Najafian for St, Cloud Times Newspaper

It is important to hear about the significance of the weapons deal between Iran and six world powers from journalists of Iranian descent who have lived in the United States and who have not been back to Iran for fear of their safety.

One such journalist is Saideh Jamshidi, who owns a news website called Goltune. Jamshidi and her eight authors cover Muslim womens fashion and lifestyle in the United States, Canada and the Middle East.

Jamshidi came to the United States in 1999 when she was only 26 years old. Prior to her trip, she worked for Irans National TV as a producer and for metropolitan newspapers such as Zan, translated as woman in English, which was founded and directed by Faezeh Rafsanjani, the daughter of the former president Hashemi Rafsanjani. Zan covered Muslim womens lives in Iran and Middle East.

When asked about her feelings toward the deal, she said feelings dont matter. Jamshidi says we are dealing with ground-breaking circumstances. This Iranian deal was something impossible, something we would not have even thought of a year ago. Believing in U.S. democracy, she notes what you understand from democracy is that it changes and adapts. Rules and regulations arise if they have to.

Jamshidi stated we are dealing with a very dire situation created by ISIS in the Middle East. Turkey, Israel, Iran and many other countries in the region are being threatened as ISIS uses Islam as a political tool to manipulate ideas and peoples thinking. She said the group is violent, brutal and cruel, and it should be stopped.