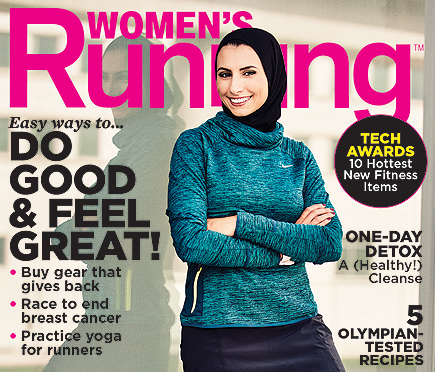 Summary: Rahaf Khatib is the first hijabi athlete to be appear on the cover of Women’s Running October issue.

Khatib is a 32-year-old mom of three who ran maratone for six times so far. She has documented her training on her blog Run Like a Hijabi, and she celebrates other hijabi athletes such as Ibtihaj Muhammad.

“We love everything she stands for: Pushing yourself, challenging stereotypes, and motivating others along the way,” Jessie Sebor, the magazine’s editor-in-chief, told BuzzFeed.

Khatib is originally from Syria but moved to the U.S. in 1980.

“I feel like [other] covered women maybe are hesitant to get out of their comfort zones,” Khatib tells Women’s Running. “May be it’s lace of apparel out there, maybe it’s all the negative press about Muslim women.”