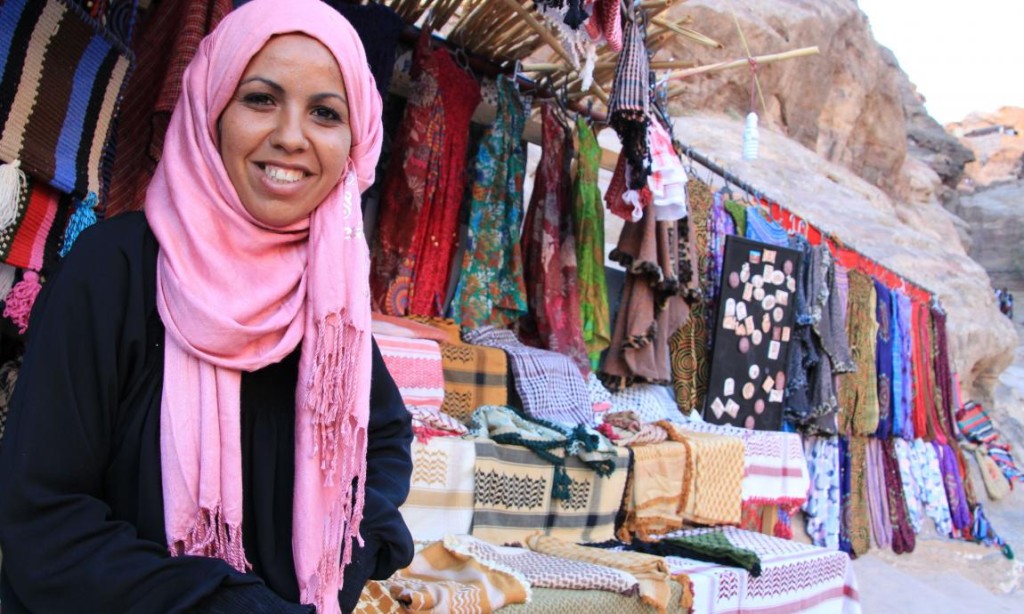 Hiking around Petra in southern Jordan, I was invited to happy hour more than once by Bedouins selling jewelry and trinkets alongside the sandy path to the Monastery. After paying a good amount of US dollars for a one-day pass, they certainly had my attention even if they were advertising discounted souvenirs instead of cheap alcoholic drinks.

In this ancient Muslim city, best known for its sandstone caves and facades carved by the Nabateans, women were covered from neck to toe. They also had their hair tucked underneath headscarves. Meanwhile, I hadnt even brought a hat to shield my face from the sun. Finding little shade along the hiking path, I began to admire the tasseled scarves that some tourists had creatively added to their ensemble to deflect the desert sun.

Manal Mohammad, a 23-year-old Bedouin woman, sensed my interest and offered me a cup of sweet tea when I stopped to catch my breath near her table of scarves. She touted the high quality of the scarves, which were handmade by female beneficiaries of the Noor Al Hussein Foundation, a local nonprofit organization initiated by Queen Noor to create economic opportunities for underserved populations. Manal convinced me to stop back before leaving Petra. Upon my return, I learned that selling these scarves is more than an act of charity for Manal. She also uses them to facilitate a cross-cultural exchange that is rooted in fashion.

Machine-produced scarves sell for $4-12 USD, she explained. The softer, more durable handmade scarves, made by a group of about 25 women affiliated with the Noor Al Hussein Foundation sell for $28-56 USD. Manals own mother is a part of this group.

Since vendors inside Petra benefit from a tax exemption, Manal says her competitive prices allow her to generate enough income through general sales to funnel profits from the Noor Al Hussein Foundations scarves straight back to the poor in her community.

Born and raised in the caves of Petra, Manal now manages sales at her familys cliff-side souvenir shop. She estimates that she sells more than 40 scarves for charity a day during the regular tourist season. This number is closer to 100 per day during peak spring and fall months.

Manal is divorced, but appears to relish her level of entrepreneurial independence The Bedouin peoples nomadic lifestyle seems to allow for more fluid gender roles than women are afforded in traditional Jordanian households.

Manal Mohammad, 23, sitting next to the scarves she sells for charity. (Photo by: Erin Luhmann)

Both populations largely identify as Muslim, but this entails a spectrum of adherence. For instance, Manal was smoking a cigarette when we met. According to Muslim doctrine, this is a prohibited habit, especially for women. While Manal bent this rule, she still adhered to traditional female Muslim dress codes by wearing a headscarf. Hers was a rosy pink scarf, encompassing her face and offering a stark contrast to her long black dress. When I asked her what she thought of all the scantily clad female tourists that pass by her shop, Manal said the high volume of tourists has worn away any shock value. She also came from a place of understanding. I respect their culture, she explained. Its like how they respect us. We grow that way. Rather than trying to impress her own dress code upon foreigners, Manal seeks ways to connect with a shared appreciation for fashion. For instance, she knows that Europeans prefer to wear scarves around their necks, rather than on their heads, so she draws their attention to the Petra-inspired embroidery that would distinguish their new winter look. It makes you beautiful, she said, sharing her appeal to a universal desire for originality and design. Back home, they dont wear these scarves, so its something different for them.

I asked her to select a scarf for me, based on her own sense of fashion, and she immediately honed in on the golden scarf that I had initially shown interest in. Im not sure if we had the same taste in color-coordination, or if she was just reluctant to overrule my fashion judgment. Regardless, she backed up her decision with her aesthetic rationale: you should match your scarf to your skin tone.

Then I asked her for a mini scarf-wrapping tutorial.

She folded the gold scarf into a triangle, pressed the base against my forehead, and let one leg lie down my back. She wrapped the other leg around the crown of my head to strategically display part of the design and tucked in the tail to secure it in place.

This is really cool, she said, stepping back to admire her work.

For my second option, she kept the scarf folded in a triangle and held it up to the front of my neck like a bib. Then she crisscrossed both legs behind my neck and pulled them back to rest on my chest. Admittedly, this is probably the style Id replicate back in Minnesota, where scarves are a necessary winter accessory.

Next, I asked her to wrap my scarf the same way she wore hers  snug around the face and secured by a pin on the side. Ive never worn a scarf this way and I assumed it would take me the furthest outside of my comfort zone.

Manal told me Id feel like a different person if I chose to wear my scarf on my head like a Muslim woman. But she wouldnt impose any value judgment on me if I chose to go the European route.

Reaching for one last option, Manal pressed the triangular scarf against my forehead and twisted both arms outward.

I see my brother do it every day, she told me, while contemplating her next move. But for the first time, I do it now.

I quickly lost track of her design plan, but from the look of approval on the face of her brother sitting at the corner, , I knew she had nailed it.

This impulsive venture into the realm of male headscarf fashion seemed fitting of Manal, who seems to thrive in the face of a challenge. She manages to converse freely with tourists from all over the world, inspiring them to invest in a quality piece of fabric that enables Manal to earn money and nourish her entrepreneurial independence.