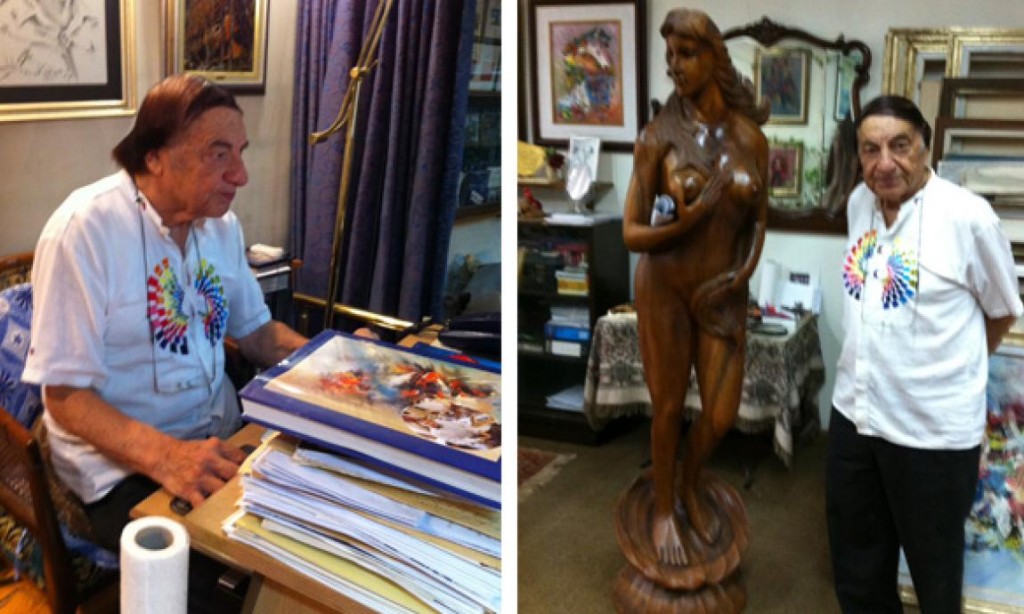 In the previous piece I wrote a story about Ranna, my daughter, and I strolling on Istiklal Avenue, a very famous street on Istanbuls European side. I explained how a 12-year-old Turkish shopkeeper on Galatas historical tourist neighborhood was able to rip us off for a cup of pomegranate juice. It was also there, in a spice shop at Galata, I met an old handsome Turkish artist. His name was Habib Gerez.

[pullquote]Summery: Habib Gerez is a Turkish Jewish artist, poet and journalist living in Galata, a historical tourist neighborhood in Istanbul[/pullquote]

Gerez took us back to the green narrow ally until we reached those very tall and heavy stairs. He climbed them with no problem– a bit surprising considering his 88-year-old figure, and placed the key in its keyhole. Waiting for him to open the door, I stared at the pamphlet on the wall. Yes, it was him, the artist and the poet, fluent in five languages, the scripture read.
Gerez opened the door and let us in. We entered a cozy, old-looking kitchen. Three wide stairs connected the kitchen to a spacious room on the right. A naked woman statue lie on the floor, and another naked woman made of a golden wood stood beside her.

Too many naked women around you, Habib, I said, referencing those sculptures inside and outside. Tell me about them.

These are the work of my best friend Mustafa, a very famous sculptor in Turkey, he replied.

Ranna pulled my skirt. I wanna leave, mommy, she said. Everything was so antique, dusty, and quiet. I had to entertain Ranna if I wanted to talk to Gerez. Finally I offered Ranna her most favorite toy, her iPad. Do you wanna watch Daniel Tigers Neighborhood until I finish my talking with Mr. Gerez, I asked Ranna, already knowing the answer. Yes, she shouted.

After I settled Ranna on a couch with her iPad, I grabbed my pen and notebook and turned followed the 88-year-old artist as he began to walk me around his three-level house.

A charming narcissist by nature, Gerez never failed to repeat his name more than one thousand times during our one-hour tour. Playful and self-assured, he showed me how he spends time between his painting studio at the upper level, his writing office on the main floor, where Ranna was sitting, and the eating area at the corner of the house.

There were about 4000 paintings and books in his warehouse. He wasnt very successful in selling his latest book Gerez: Art is my destiny. He handed me the book, Here, you can have this. As you see I have plenty, he said.

Unmarried with no children, Gerez owns four cars and he vacations in Italy and France. I am not a wealthy man, you know, he said. But I know how to enjoy life.

A  Jewish attorney by training, he never practiced law seriously. Instead he had spent his time working as a reporter for different newspapers in Istanbul, including Haftamn Sesi, A Jewish-Turkish newspaper he cofounded in 1956, and later for Salom, for which he wrote poems until 1997. Salom newspaper liked his poems and paid him handsomely.

Gerez didnt have an appetite to listen to anyone but himself. He loved to hear the sound of Gerez, echoed in a room like a romantic music. I found him overwhelmingly eccentric, very likable, and gentlemanly  polite.

Even so, after all of those talks about Gerez, I knew so little about him. It was time to ask a personal question. Have you ever been in love? I asked him. He pretended he didnt hear my question.

We went back to the same spacious room where Ranna was watching her PBS Kid cartoons on her iPad. Gerez sat behind his computer to open a link. He wanted to show me an interview he conducted for a TV show. Everything is in English, he said.

Gerez, I know so much about your accomplishments, I said. But what about yourself? I asked you a question a minute ago, but you never answered, I pressed.  Once I loved a woman I shouldnt have, he said. Lets leave it there.

Rumor has it that when he was a young man, Gerez fell in love with a French woman married to his Turkish-Jewish friend. After that big chaotic love, he could never love any other woman.

And, how do you get along with Muslims here? I asked.