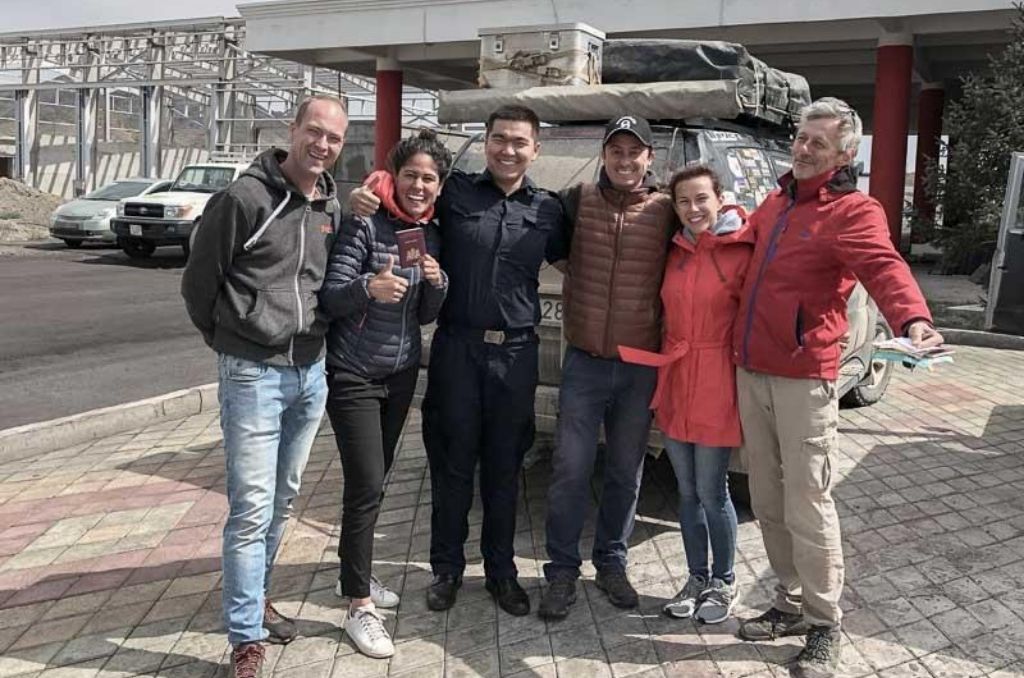 Is it too early to talk about travel, during the COVID-19, when the world tries to be safe and to heal itself? Depends! If you are adamant to travel to China, via Singapore, by car when you wanna camp, rather than stay in hotels; you need to think, brainstorm, plan, research, and gather your resources a few months in-advance.

This article is posted with prior permission.

There are thousands of travel blogs out there that can help travelers decide where to go and what to see in China.

In this post, I’ll try to focus on traveling through China from an overlander perspective and share our experience organizing this part of the trip, from dealing with bureaucracy to trip planning and execution.

When we came up with the idea of driving from Hungary all the way to Singapore, the big question in the proposed itinerary was China.

What kind of permits and other bureaucratic hoops to jump through are needed in order to drive through this country with our own vehicle? How much does it cost and how do we even start organizing everything?

After doing a bit of research, I discovered the following:

Step 2: Finding other overlanders to cross China with 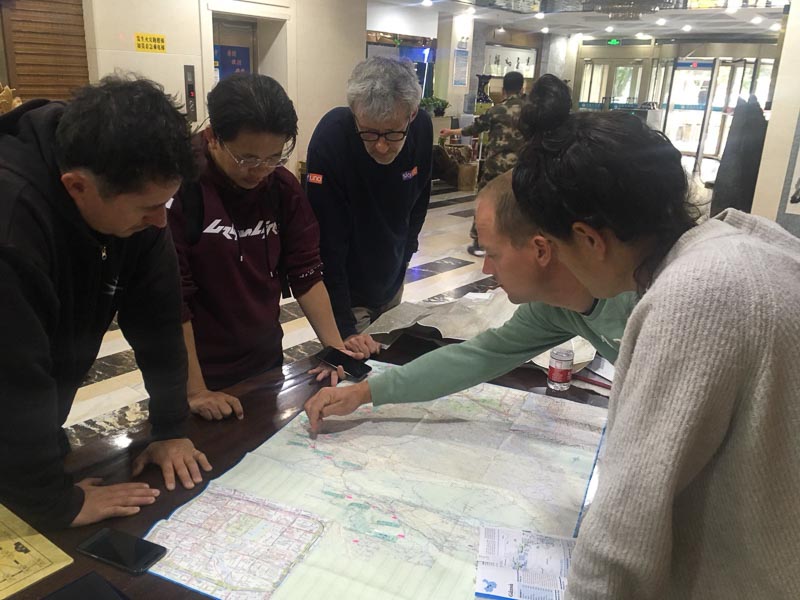 Starting with this limited knowledge, I set off to try to find travel companions who had roughly the same ideas and whose timing were in line with ours.

Since we’d be leaving around mid-June 2017, I figured we’d be crossing China around August-September.

Trying to find other overlanders with similar plans and requirements may sound hard at first but joining overlanding groups on Facebook makes this far easier, as you can either post in these groups or look for others trying to find overlanders to join their China trip.

The Overlanding Asia Facebook group is your best bet.

This is how we “met” Lotte, Niels and Giampiero in December 2017. There was another couple who were part of our discussions about the details of the trip, but for personal reasons they eventually decided not to join us.

Once you find people to go through China with though, discussing the details, itinerary, duration, etc. can be an exhausting exercise, not to mention the important task of finding a tour company.

If your plans and requirements are not in line with your potential travel partners then it might be a good idea to find other people, because you probably won’t be overlanding through China again any time soon.

I can say that we were very lucky with our group. They were all easygoing and wanted the same kind of experience we did; namely, exploring the rural areas of China and planning the itinerary to go as far west as possible. 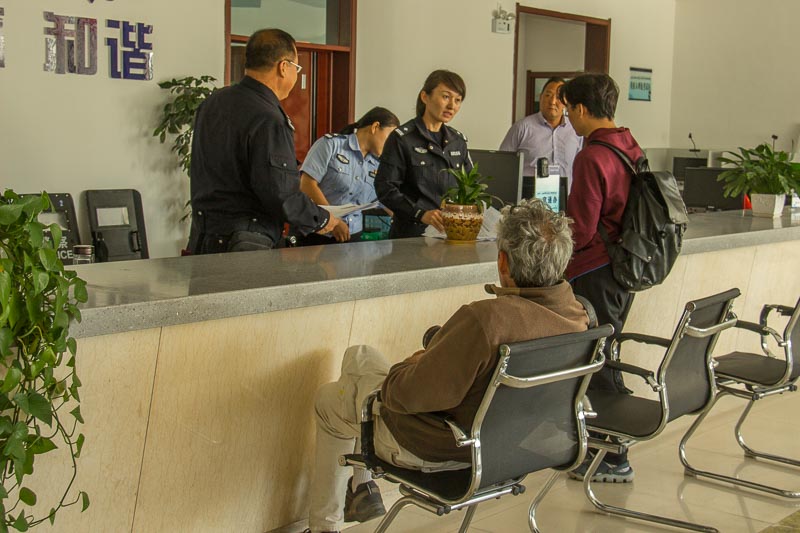 I found this task to be the most overwhelming. Eventually, you’ll be spending several weeks with a guide provided by the tour company.

For a good experience while overlanding through China, you’ll therefore need a company who is willing to listen to your specific requirements (itinerary, camping, etc.), and a guide who’s easy to talk to and professional in handling all necessary paperwork and police dealings at checkpoints.

I admit, most of the work to find a tour company had been done by the others in our group.

We had six companies we were considering:

We all agreed that our most important requirements were the following:

It took us at least three months to talk with all of the companies through conference calls on Whatsapp and WeChat.

The hardest part was to get companies to agree on us entering in Xinjiang, and to at least get them to promise we could camp. Companies that didn’t agree or like these requirements were quickly eliminated from our little tender.

Entering Xinjiang is just a lot harder, therefore a lot more work for tour companies, so all of them except for Adventure Tour China tried to persuade us to choose Erenhot instead.

Costs were also a big consideration, of course. Eventually, we asked for quotes from each of the prospective companies, which looked as follows:

By giving points to each of them for every criteria (a great system that I can’t claim any credit for putting together, as it was done by the other guys), it became clear which companies we shouldn’t consider.

For a good China travel, you’ll need a tour company who listens to your specific requirements, and a guide who’s easy to talk to and professional in handling paperwork and police dealings at checkpoints.

However, choosing the winner came down to the company accommodating our most important criteria as mentioned above.

After months of chats, emails, discussions and negotiation, we chose Adventure Tour China. Having now spent 43 days with Shang (the owner of the company who also acted as our guide for the first part of the trip) and Brenda (our guide for the second half of our travels through China), we feel confident in saying that we made a very good decision.

Both Shang and Brenda were very patient and easygoing, and did their best to accommodate all our requirements.

I spoke to several overlanders since we left China on October 15th, and their mixed experiences with their tour companies also confirmed for us that Adventure Tour China may be one of the best companies to overland China with.

Balancing out the fact that Giampiero was traveling alone in his vehicle and that we had two people each in the other two vehicles, our part of the cost  came to €2,796 (about US$3,220).

You could argue that this is expensive, and in a way it is, but the experience of overlanding through China is very special and we had the chance to see the country from an extremely unique perspective.

Besides, if you want to drive to Southeast Asia from Mongolia, you either have to drive back through the Stans, India and Burma (Burma also requires you to travel with a guide, by the way), or else maybe take a ship from Vladivostok to Cambodia.

Neither of these are cheaper alternatives, and of course don’t allow you to see China. 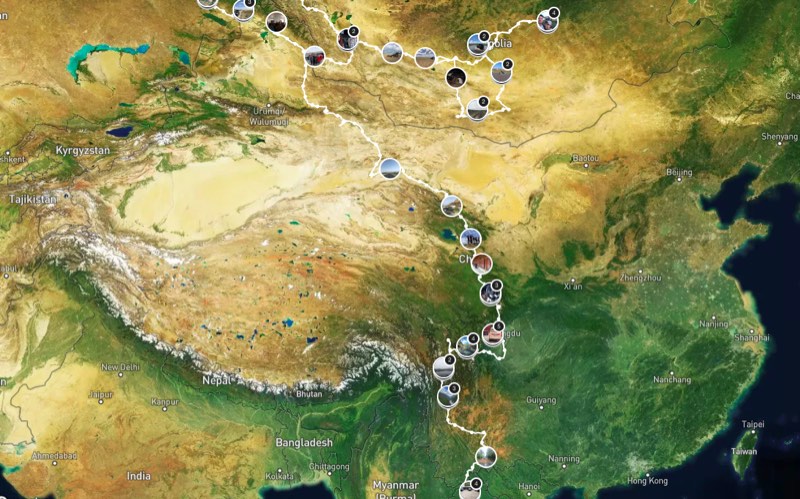 Planning the route will be between your group and the tour company. As a group you will need to decide which border would you like to enter from.

Most overlanders actually enter from Kyrgyzstan, and from Mongolia, Erenhot is by far the most popular.

As I mentioned, we wanted to drive as west as possible, and Adventure Tour China put together a great 40-day itinerary for us. We drove through Xinjiang, Qinghai, Gansu, Sichuan and Yunnan provinces.

I was afraid of going to too many big tourist attractions, but this wasn’t the case at all. Our route was very well balanced, with historical monuments, temples, monasteries, national parks, a few towns and cities, and plenty of rural roads.

After you enter China, the following are required:

The tour agency didn’t push us to use expensive motorways or hotels, so we could drive on country roads and camped wherever it was possible.

The other guys could camp a bit more than us, as with the rooftop tent we were a bit restricted due to rainy or colder weather in some places.

We saw more of Tibet (Amdo and Kham) than I expected, and even slept in a Tibetan house in one of the most beautiful spots I’ve ever been. 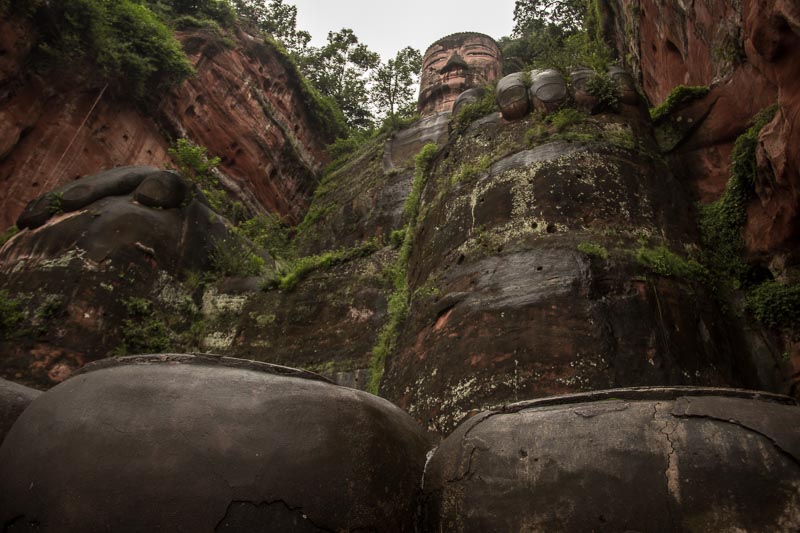 We all couldn’t believe that the day had come when we entered China. We arrived at the border early in the morning, but had no idea that 5 days of bureaucratic pain was just about to start. Entering Xinjiang province means you have to go through many more checks and more thoroughly than if you enter at Erenhot.

Our phones were attached to a device that scanned it for about 10 minutes. I’m not sure what they were looking for –  perhaps emails or messages about Xinjiang or China itself.

We never found out. They also went through pictures on our cameras and computers. They went through the vehicles several times and confiscated my pocket knife.

Apparently it was too pointy and those are not allowed in Xinjiang!

It goes to show that they’re not very consistent, as they didn’t confiscate our much bigger kitchen knives.

Rules about knives are so strict In Xinjiang that locals are only allowed to buy knives if their personal QR code is engraved into the blade. We saw cooks in restaurants who were using knives that were chained to the wall!

After 5 full days of administrative torture and vehicle examinations (all vehicles have to pass technical checks), we received our temporary driver’s licenses and license plates.

After you enter the country, the following are required:

As this was where our transmission was being fixed, we needed one extra day, so 6 days after showing up at the border, we were finally on our way to explore the country.

So out of our planned 40-day trip we spent the first 6 days in the small town of Altai.

Going through Xinjiang province deserves a separate blog post. Checkpoints are very frequent and many of them take about an hour, so progress is very slow.

Once you leave Xinjiang, everything changes. Gas stations are not fenced and protected, phones suddenly work properly and there are no checkpoints.

But in all provinces of China you will need to use a VPN to access your usual social media accounts and messaging services.

A VPN is a software (in case of a phone it’s an app) that you need to install and it will basically fool the system by making your phone or computer appear as if it was on the other side of the Planet so the restrictions in China won’t block you any more. If you’re traveling in China, it’s a must.

In general, anywhere we went in China, people were amazing. Everyone was very welcoming, taking photos with or about us.

Locals even cooked for us in one of the tiny villages where we camped.

Overlanding through China was a highlight of the entire trip for us so far. We’re extremely happy that we decided to do it and were very lucky with Adventure Tour China.

I can highly recommend them and am very happy to provide anyone with more information if you shoot me an email.