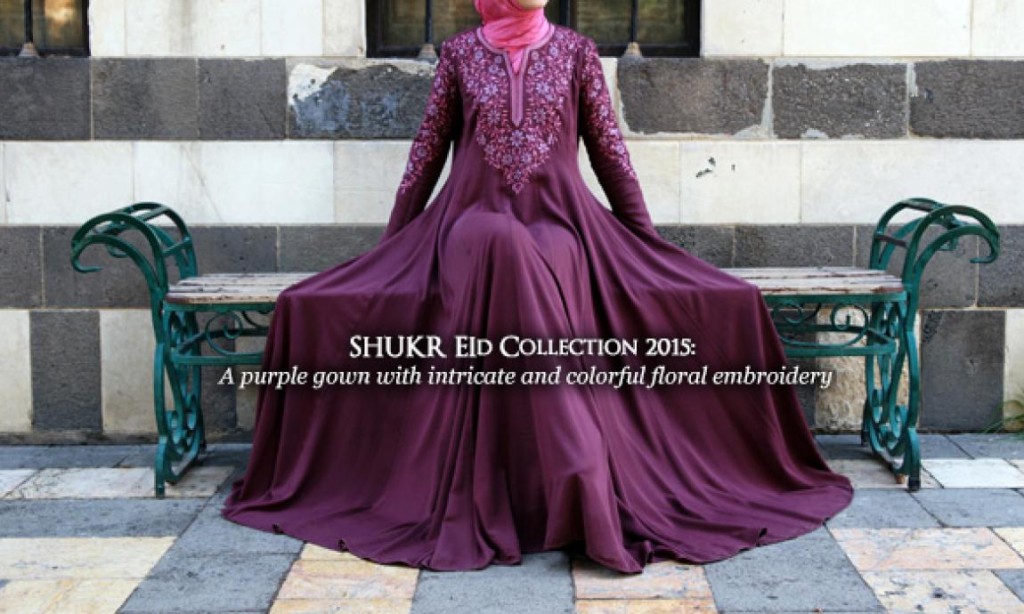 Anas Sillwood is the founder, and co-owner of SHUKR, a well-known Islamic clothing design since 2000. Sillwood is dedicated to design and produce beautiful and stylish Islamic dresses.  His 2015 Eid collection is a feast of color and fashionable design. He talked with us via email correspondence.

As our policy in Goltune, we wanted to publish his photo along with the story, but Sillwood follows a restrict rule prohibiting any face-image publication, neither for himself, nor for his models.

1. Why do you think it is important to create an Islamic fashion brand?

For Muslims living in the West, the key need is to develop an authentic, culturally appropriate form of Islamic dress which conforms to the precepts of our religion but which adopts the best of Western fashion tastes and styles. We are trying to promote the traditional, balanced, moderate Islamic approach to integration in Western lands:

2. Some of the Western audiences perceive Muslim women as oppressed due to the way they cover themselves. What is your philosophy in your design to address the same issue?

There are certain clothing items that Western audiences associate with oppression  the niqab, khimar, all-black outfits etc. By offering Islamic clothing which is contemporary and stylish, in a range of cuts and colors, this will almost inevitably have a positive impact on changing public perceptions about Muslims.

3. Do you think dress has the power to alter perceptions? e. g improve Muslim self-esteem? Enable greater integration/acceptance of Muslims in the West?

No doubt dress is a very powerful social factor, which has repercussions for the person wearing it and the person interacting with the wearer. Many Muslims are going through an identity crisis in the West at the moment. Their faith is under intense scrutiny and their loyalty to their country is being questioned. Many Muslims  whether first, second, or even third generation – have trouble reconciling cultural practices from traditional Muslim lands with the new cultural realities in the West. We have had hundreds of comments from happy customers who have found our clothing gives them the opportunity to be faithful to their religion whilst not appearing like oddballs in front of their fellow countrymen. This hopefully builds their self-esteem.

4. Would you have any concerns about Muslim fashion industry?

Our concerns are that Islamic clothing companies and designers are falling prey to the temptations of designing and presenting clothing that is not really Islamic at all. On the surface the clothing tries to be Islamic by covering the entire body, but other aspects of the Islamic dress code are ignored, like the need for the clothing to be loose. Sadly, it is very common to see full length jilbabs which are very tight at the chest, or loose tops paired with skin tight leggings, or flowy dresses which are drawn in tightly at the waist, or other tops and dresses with very tight sleeves. When clothing is designed in such a manner it draws attention to the body and defeats the purpose of Islamic clothing. Unfortunately, the streets of Muslim countries are full of Muslim men and women wearing very tight clothing.

Changing the current direction of the industry requires education about the beautiful standards of Islamic modesty that Muslim societies used to follow in the past and genuine creativity in finding Islamic solutions to designing and marketing contemporary Islamic fashion in the modern world.

5. What role do you think fashion can play in combating stereotypes about Muslims and racism against Muslims? Is this something you consciously think about in developing your enterprise?

At the moment, there is a trend, perhaps the dominant trend, to consider Muslims as cultural mis-fits in Western society. Their clothes, customs, practices and beliefs are all in some way incompatible with secular Western society. A lot of the problem lies in ignorance and Islamophobia, whether subtle or overt. Thats why it is very important for Muslims to take the initiative and educate others about Islam, and wearing modest, Islamic clothes which are culturally appropriate is one way all Muslims can educate others, simply by their appearance. SHUKR is a conscious effort to take responsibility.

6. Where is SHUR heading in terms of its fashion platform? In other words, would you see your company taking more serious stand on the global scene for Muslim fashion? How so?

The Islamic fashion industry has been growing at a very rapid pace. When SHUKR first started over 10 years ago there were hardly any competitors in North America and Europe. Now there are maybe hundreds. A similar development has taken place in Muslim countries with official promotion of the industry in countries like Indonesia and the UAE. However, Islamic fashion has not yet fully gone mainstream as a recognized industry, even in Muslim countries. So there are numerous countries all around the world where there are untapped markets.

Finally, there is an opportunity for Islamic fashion to impact and cross over into the mainstream fashion sphere, appealing to non-Muslims as well as Muslims. There are many religious Christians, Jews and other faith communities who would like more modest offerings than what the current mainstream fashion industry offers. Although it may not be considered trendy to dress modestly, SHUKR hopes to help change this perspective, one garment at a time.