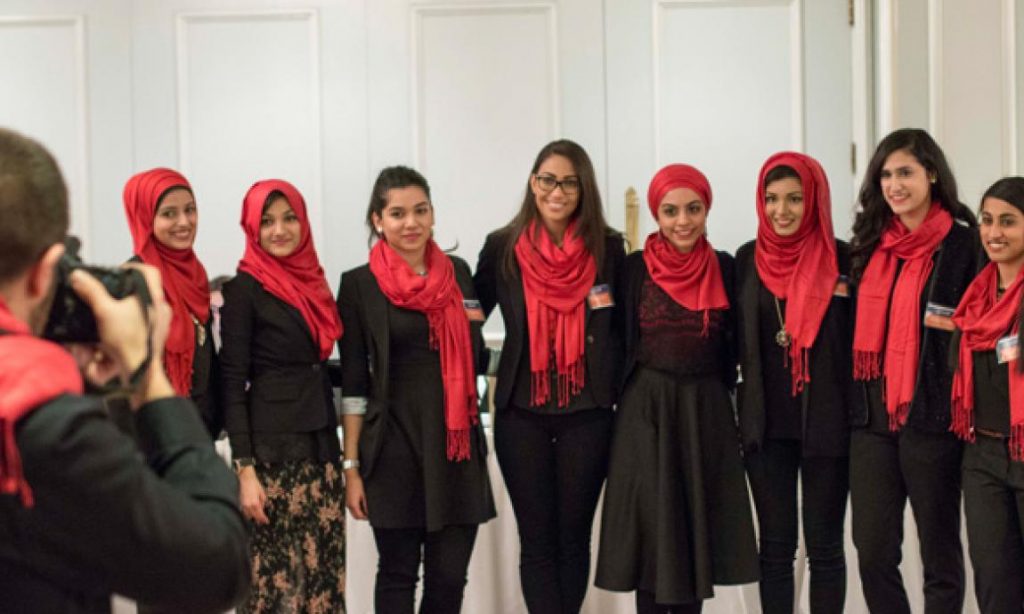 More than 1,000 American Muslims joined the Council of American-Islamic Relations, or CAIR, in Chicago to help raise money in their 11th annual fundraising event.

One of CAIR-Chicagos missions at the banquet was to address islamophobia. Muslims are the most negatively viewed religious community in America, said Dalia Mogahed, director of research at the Institute for Social Policy and Understanding, a Washington DC-based think tank focused on the challenges and opportunities of the Muslim American community.

In the wake of North Carolina shooting that killed three young Muslim students, fighting against Islamophobia seems more imminent than ever for this advocacy group.

When media outlets frame things in Islamophobic terms, we [Muslims] have to keep pointing it out and making noises. Then secondly, we have to offer a different narrative of this Muslim American as a vital organ, not a benign tumor in America, said Mogahed.

In this event, all of the 100 staff and volunteers at the event wore black outfits and a red scarf around their necks for men, or around their hair for a few of the women.

With welcoming smiles, volunteers guided guests to long tables covered in spotless white cotton clothes to talk with registrars. Those guests who had already registered would find their names in the list, otherwise, they were asked to pay $75 before they could enter the 100 Drury Lane ballroom.

I am Muslim, I am a physician, and I pray five times a day, said Ahmad Agha. I want CAIR to change the view of the media about Muslim Americans. I want CAIR to have the possibility of representing me, the mainstream, to the media and to my American people.

After a short documentary about CAIR-Chicagos achievements, Ahmed Rehab, Executive director of CAIR took to the podium to deliver his powerful speech.

Rehab reminded audience members that CAIR-Chicago has won more than 100 cases in favor of Muslims in different levels of the court system in the country.

We have civil rights violations. We have somebody on Facebook posting that they are going to shoot people in a certain suburb here, in a certain mosque. Another mosque just recently received a letter with rabid expletives, threatening to kill Muslims in that mosque, for no other reason than theyre Muslim.

After a long pause, Rehab asked, Where have we gone wrong?

Islamophobia is not going to get any better because of the elections coming up, said Mogahed. What people dont understand is Islamophobic rhetoric. Islamophobic sentiment increases with elections and war, not with terrorist attacks. So its not what Muslims do that makes people hate us. Its what is said about us. Its how things are framed.”

Proactive is not even worrying about being attacked or defending or attacking first. Proactive is thinking about who do we want to be, what are we all about, Rehab said.

Setting the stage for the next and the most important speaker of the night, Rehab gave the podium to Safaa Zarzour, CEO at the IRAQ Foundation and fundraiser.

Zarzour mentioned he had one important mission, I want to raise at least $150,000 of our $300,000 goal for tonight. The number was showing on two big screens on both sides of the podium.

Knowing how to direct the event with his sense of humor, Zarzour inspired four individuals to raise their hands at the $10,000 level, and more than six hands went up at the $5,000 level. During his speech, many of the audience members were busy writing checks or filling out the donation slips, even a few students at nearby tables.

Zarzour surpassed his mission that night. CAIR-Chicago was able to collect more than $194,000 over the course of the night.

CAIR meets one incredibly important need around civil rights and civil liberties, representing Muslims in the media, Mogahed said. But we need telling our stories, of humanizing the community; we need more people offering more nuanced depictions in culture, and literature, and movies and TV.