NPR – Iranian women are burning their hijabs and cutting their hair short in protests over the death of Mahsa Amini, a young woman who died after being arrested in Tehran by Iran’s notorious “morality police.”

In this video, Sara Jamshidi explains her personal story of taken into the police custody for wearing her hijab improper. Waiting for her faith to see what might happen, she was lucky to be released in the last minute.

It was about 36 years ago, which feels like yesterday, when the morality police arrested me on the streets of Tehran for wearing “western style sunglasses.” My mom brought the sunglasses for me, and my sister, from Germany. I was in one of the largest park in Tehran with my cousins. We were about 7 kids in my grandpa’s house. My dad asked my uncle to “take the kids out.” it was Newruz.

People were coming over to my grandparents’ house, the eldest in Jamshidi family, to visit and pay respect. The kids were making too much noise and mess.  I was wearing sandals and sunglasses when we left the house for the park.

We played a great deal in the park. After 4 or 5 hours, we were tired and hungry getting into the car to go back home when the morality police came to me and my older cousin of 18 and took us away. My uncle didn’t notice the dilemma until it was too late.

The police put Sara and her cousin in a dark black room with another 20 women they arrested for ‘bad hijabi.’ They didn’t know about their faith.

In that dark black room, Sara could hear a tape reciting the Quran. There was another tape recorder playing women’s voices getting lashes. “I knew they were tapes,” Sara said. “I started complaining and asking questions,” she continued. A few minutes later, two women came inside the room and separated her from the others. They took her to an even darker room with less women. Maybe three or four more people.

“I was so scared, so frightened and so paralyzed that I still couldn’t remember what happened in that room. My brain was frozen. we were sure they were going to whip us. The punishment was between 50 to 80 strokes. I was just 14. I kept thinking how I was going to hold up to the stokes. One of my dad’s friend’s daughters was hospitalized for two weeks after getting lashes,” Sara remembers.

“I never understood how my uncle got me out. I think he called my dad. And my dad deposited a very large sum of money to their bank account. I was out in 15 min. I wanted to take the other 2 or 3 women with me, but I couldn’t,” she said. 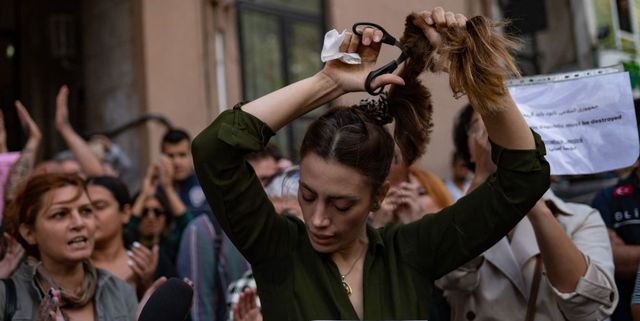 NPR Reports – Here’s what we know so far about Amini’s death and the public furor it ignited, and the questions that remain:

Amini, 22, died on Friday in northern Tehran. She had been arrested on Tuesday and reportedly was taken to a hospital shortly afterward.

Amini suffered multiple blows to the head before she died, according to London-based broadcaster Iran International.

Amini was arrested in her brother’s car during a visit to see family members in the capital, the outlet reported. She was originally from Saqqez in Kurdistan province.

Her father says she was beaten to death in custody

Amini’s family say officers beat her in the police van after her arrest, citing eyewitnesses who support that claim. Police reject the allegations, saying Amini died after being taken to a hospital because she had a heart attack.

Senior officials who are promising a full investigation include President Ebrahim Raisi, who called Amini’s family on Sunday to assure them her death would be investigated.

“Your daughter is like my own daughter, and I feel that this incident happened to one of my loved ones,” he said.

The United Nations called for a impartial inquiry into Amini’s death.

“Mahsa Amini’s tragic death and allegations of torture and ill-treatment must be promptly, impartially and effectively investigated by an independent competent authority, that ensures, in particular, that her family has access to justice and truth,” acting U.N. High Commissioner for Human Rights Nada Al-Nashif said in a statement.

Laws that require women in Iran to cover their heads in public remain “of concern,” the U.N. said, adding that the morality police have recently stepped up street patrols.

A photo of Amini lying comatose in a hospital is at the heart of a rallying cry for Iranians who want more freedoms and rights for women.

The government has pointed to its own images to prove Amini wasn’t beaten in custody. Shortly after her death, Iranian police released surveillance camera footage of part of her arrest.

“The video shows the woman suddenly collapsing on a chair while she was talking by a female police in the police station,” according to state-run IRNA news agency.

“This is Iran’s George Floyd moment,” British-Iranian actor Omid Djalili said in a video posted online, drawing a parallel between demonstrators who want change in Iran and Americans who called for police reforms after Floyd’s death in custody.

Social media has been buzzing with the unrest. On Wednesday morning, top hashtags in Iran included posts about police responses to ongoing protests over Amini’s death and another that essentially states, “No to the Islamic Republic.”

But backers of the establishment have been blasting out their own hashtag: “My Iran.” Featuring patriotic images and photos of authority figures, the messages highlight how much the current dispute is part of a bigger fight over a country’s national identity. 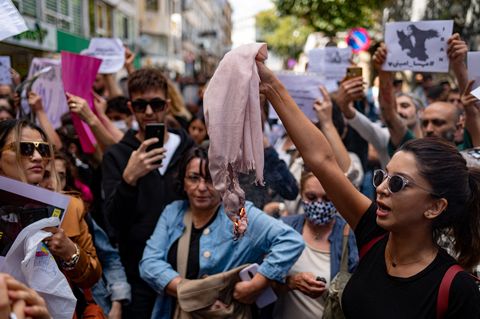 Women are burning their hijabs in protest

Iranians outraged by Amini’s death have been demonstrating for nearly a week, with some women setting their headscarves on fire in the streets.

“One question is whether this will stay as a hijab protest or mushroom into a larger anti-government movement,” NPR’s Peter Kenyon said on Tuesday.

At least seven people are reported to have been killed since the protests began throughout Iran, the BBC reported.

Amini is the latest symbol of the oppression of Iranian women

In 2019 an Iranian woman named Sahar Khodayari dressed up as a man to sneak into a stadium and watch a men’s soccer match.

When the 29-year-old was arrested by police and learned she could spend six months in jail, Khodayari set herself on fire in protest and died.

The incident sparked outrage in the country and beyond over the strict rules – and consequences for breaking those rules – that women in Iran face every day.

Gender-based violence against women, including so-called honor killings, continues in Iran, and the country’s laws do little to protect them, experts say.

In a tweet in response to Amini’s death, Robert Malley, the U.S. special envoy for Iran, called on the country to increase protections for women.

“Iran must end its violence against women for exercising their fundamental rights,” Malley said.