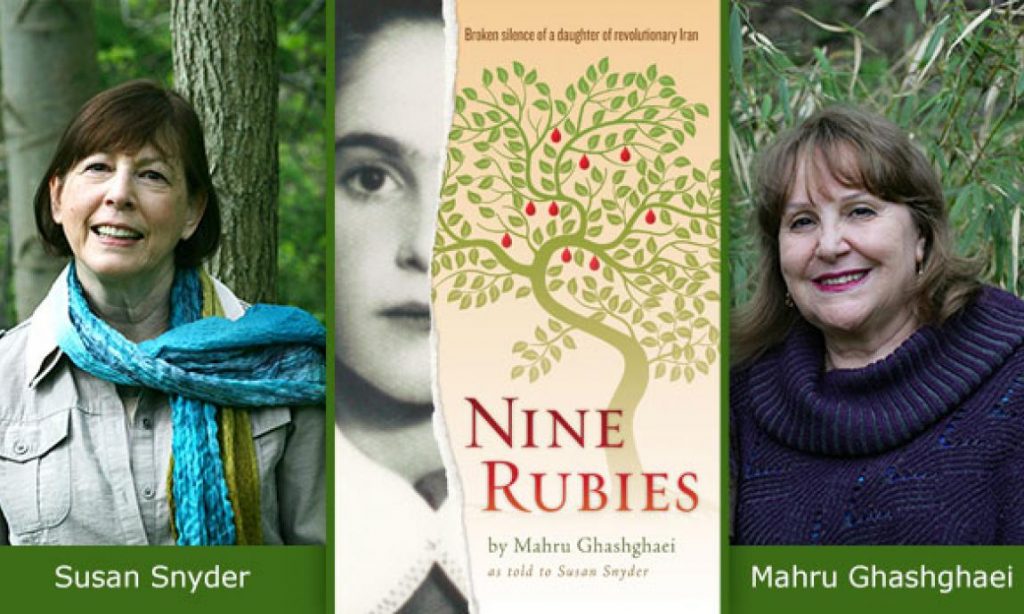 When Muslim Iranian Mahru Ghashghaei sat down with her friend Dr. Susan Snyder ,a Jewish American , and began recounting childhood stories,  It was a therapy of sorts.

Snyder recalls: “Mahru had left Iran; it was a very difficult time politically and it was a difficult time for her personally. I had done an oral history project at one of the schools I was teaching in, so I started just typing down what she was saying.

She came every day with a different story and we’d write it down. We did this on and off for about 20 years.”

Mahru’s grandfather gave her mother nine rubies and told her one day she would have nine grandsons, which she had!

The coffee talk eventually turned into the novel Nine Rubies, coauthored by Snyder and Ghashghaei. Published in 2011, Nine Rubies is Ghashghaei’s personal account, spanning the course of several decades in a small village north of Tehran.

In this place, childhood is far too brief for some Muslim girls, while others are afforded the luxury of education and chosen marriages. The book highlights the stark contrasts that impacted young Mahru’s world: teen rock and roll parties and devastating poverty, independent women and child brides.

Mahru was often caught in the middle. She grew up very poor in the house of a wealthy family and was treated as “one of them” while her mother struggled as a housekeeper to work and keep her family together.

Back then Ghashghaei, a bubbly, joyful woman, had a secret world inside the household’s lush garden. It was there that she received consolation from her grandfather the willow tree, played school with tadpoles in the pond and conferred with her cousins the flowers, all of whom she had given names. From an early age, the youngest daughter found protection from “the bad stuff” in the world by detaching herself.

The reality of the family’s situation was precarious. At one point Ghashghaei’s sister Ashi was sent away to live with their estranged father. Ashi was only twelve or thirteen when she was deceived into marrying an abusive cousin, and there was no way out.

“It was hard for me to find an identity, but maybe I became a consulate” says Ghashghaei, meaning that she often traversed two worlds and had to navigate her way around people questioned her motives.

Parts of her story are difficult to read. Very young girls are sexualized and abused; a child’s fate is not her own. “It’s not Iranian culture,” says Ghashghaei. “It’s a class struggle.”

Snyder, a writer and educator, points out that victimization happens everywhere; it’s only a matter of recognizing it. “I work with abused children who live in poverty. You can see the light go out in their eyes after something has happened to them.”

Ghashghaei is a counselor and lives in Hoboken, New Jersey with her son and husband. Still, she keeps a pulse on Iran. She and Snyder have recently agreed to numerous speaking engagements and television appearances.

On November 9th, they presented on Iranian women and women heroes at the Norwalk, Connecticut Public Library. On May 23, 2014 they will be at Seattle University with the Department of Persian studies. In the meantime, the two friends continue to promote the book, care for their families and gardens, and advocate for women’s and children’s rights.

Despite these sorts of tragedies, Nine Rubies also serves as an inspirational and sweet family story. When Mahru’s grandfather was on his deathbed, he gave her mother nine rubies and told her one day she would have nine grandsons, which she eventually did.

The story proves it is possible to change the status quo. Ghashghaei enlisted her sisters to help remember the past and recount painful events. “Each time I was in Iran”I sat with them and I taped what happened. And they all agreed it was just the time for us to speak out.”

In Ghashghaei’s case, education was essential to her survival and independence. Eventually she was able to care for her mother while studying nursing and working multiple jobs.

The story is yet another reminder there is still work to be done in educational rights and gender equality. Ghashghaei says she can identify with Malala Yousafzai, the brave Muslim Pakistani student who took on the Taliban and continues to be vocal about freedom, peace, and access to schools.

“I think Malala can support many, many people because she is the center of attention now,” says Ghashgaei. “But I admire her. I see my soul in her when I was that age. When Diane Sawyer asked her ‘Is this wisdom or is this braveness?’ she said “I just wanted the right things. I was like that. I wanted ‘the right things'”.

“When I was caught in Turkey and I spoke out they wanted to cut my tongue. I feel I have that soul. Malala is like my child,” Ghashghaei laughs. “She is very lucky because she has [a lot of support]. I did not have that support, but I had that soul.”

Both Snyder and Ghashghaei emphasize that Nine Rubies is not a political book, but a tribute to Ghashghaei’s brave mother who taught her daughters to find their own strengths and persevere.