London Muslim Lifestyle Show included fashion catwalks as part of ticket for the audiences to enjoy the fashion at the expo.

The Muslim Lifestyle Show returned to Olympia London, for the third year in a row, and took place during the unseasonably sunny weekend of the 21st and 22nd of April. The event, which included fashion booths, beauty tutorials, food stalls and seminars, attracted around 20,000 people from across the UK and abroad. The main focus of the show, however, was modest fashion, which was presented through four runway shows in the center of the Olympia exhibition hall.

“We have over 28 designers presenting on the catwalk”, says Waleed Jahangir, the CEO of Algebra Consulting and Head of London Muslim Lifestyle Show. The designers come from seven different countries, including Malaysia, Turkey, Japan, Morocco, Egypt, Italy,and of course, the UK. Some are established brands, and some are small retailers and entrepreneurs. ”It’s all about giving the designers the support they need, and provide the audience for them,” Jahangir continues. And for that reason, a ticket for The London Muslim Lifestyle Show cost only £5, and every person who got in, could see the runways (even if not from a seated position).

This is one of the big changes made to the London Muslim Lifestyle Show from the year before, where visitors had to purchase additional tickets to attend the fashion shows. Kevin Jackson of The Experience Is The Marketing explains this choice: “we didn’t want to segregate the fashion. When the music hits, and the models start walking, it’s going to be a different feeling in the room. We want that energy, and fashion is energy.” 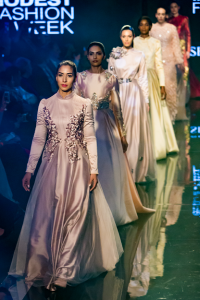 Another major shift with the event is the decision not to include big names. While last year, the internationally renowned model Halima Aden opened the catwalk, this year, there were no big announcements. “We have another fashion show planned in Westfield, on the 23rd of June, and that’s where we’re going to bring the big guns,” says Jahangir.

Nevertheless, the last catwalk of the weekend did manage to attract one big name, at least for girls aged 8-18. The singer ​Harris J, a 21-year-old English Muslim who won a talent competition, and is deemed a kind of Justin Bieber for the UK Muslim community, took the front row. He also took countless selfies with adoring fans, once the event was finished.

From traditional to trendsetting

On the four catwalk shows that took place during the weekend, it was evident how versatile the modest fashion industry really is. Brands such as ​Saiqa and Farrah Naaz showcased the more traditional side of the industry. The first presented soft pastel colors, that draped around the models’ figures, paired with rhinestones and sparkly patterns. The second also features patterns, but chose to do so with bright, bold colors, and big, full skirts or wide pants.

Other brands took a more casual, daily approach. Such was the U.K. brand Modessa, which showed off a flowy collection, with simple lines, pastel colors for high-waist pants and robes covering body-suites. The Malaysian brand Aidijuma also followed that casual trend, and featured a cotton-based line, with fun bubblegum colors, and tops that can be worn inside out.

On the other side of the spectrum were brands and designers that brought out a creative and fresh look. Munamer by Chiara Taffarello presented a collection of tight, shiny fabrics, with mixed patterns, which almost looked like swimsuits, and could easily be worn to any beach. Meraki Melon, while also creative and fresh, showed a more edgy and retro look, of slick skirts and pants, and tailored shirts, which can elevate any office outfit.

The next generation of modest fashion

Define Clothing and Modestrove both showed a youthful take on modest fashion, which creates excitement around the future of the industry. “Because this is one of our first fashion shows outside of Leicester (where they are based), we wanted to make sure that we carried our shop through,” says Zina Patel, the designer and owner of Define Clothing. She referred to the unusual styling of the models, who carried plastic umbrellas, and even a vintage birdcage, which is a part of the store display. The clothing also carried the unusual trend, with big ruffled skirts, bold heavy fabric, and a standout raincoat with a chiffon, skirt bottom. Most of the pieces were one of a kind, and all inspired by a retro look that can’t be found on the high-street.

Modestrove’s collection “is inspired by our local movie from 1963; an old vintage movie,” says the Malaysian designer, Nurul Syuhada. She designed the collection along with Salleh Hamid and Helmi Hamdan. On the runway, the models wore head scarves with pictures of comic-stips, along with leather skirts and jackets, big sun glasses, and hoop earrings. The fabric for the clothes was made especially for the show, by recreating scenes from that vintage Malaysian movie. “We want to show people how Muslims in Asia style themselves,” Syuhada adds. “Asian Muslims normally wear hijabs along with leather, and high boots to cover more of the leg (instead of a longer skirt), and sometimes even a sexy slip.” The trio’s next stop is New York Fashion Week.

A modest look for the modern woman 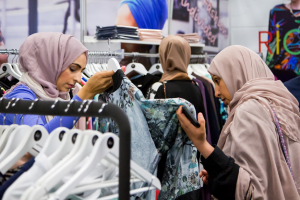 “When I go walking into a high-street shop, I don’t find something long, that gives you coverage, but is also stylish at the same time,” Zina Patel says. That was the main thread that ran through most of this year’s collections in The Muslim Lifestyle Show; the desire to give Muslim women better choices, and more stylish choices. And it’s not only limited to the Muslim community. “Modest fashion is not just a Muslim thing. It can be, and should be a western thing.” Kevin Jackson says. “It’s very interesting for me, as the father of a teenage girl. It shows her that fashion doesn’t have to be massively revealing to be attractive.”