This story was posted on October 22, 2013. All the shops and brands still in business. This story hasn’t been commercialized or sponsored.

The story is of a girl who’s sitting around in a city café. She’s casual. She’s stylish. She’s confident in herself.

That is how Nadine Kanaan, marketing manager for ultra-chic Hijab House in Australia, sets the scene when talking about the new line of clothing for Muslim women, set to hit shelves this fall. It will be both dramatic and soft, Kanaan says, casual yet eye-catching. She talks specifically of a sheer buttoned collared shirt paired with a gorgeous black and white, puffy skirt. It reminds her of Dorothy from the Wizard of Oz.

Sometimes life mirrors art. Imagine now that Dorothy represents all that is new and fresh in Islamic fashion today. And it is as if Dorothy (and her house of neo-Muslim style) had been swept up from Jakarta in the east by a sizeable tornado and was dropped all over parts of the world, in unsuspecting places like Sydney, Seattle and Washington, D.C. In the tornado’s wake lies a flurry of silk scarves and pretty abayas. These are just a few of the locations where intriguing new designers are launching brick and mortar boutiques and online collections of beautiful, hip and modest clothes (to the great joy of women throughout the land).

So what does it take to make it in “hijab Oz”? What elements contribute to a store’s success?

Ingenuity helps. Sisters and business partners Bayan and Amany Jondy grew up in Flint, Michigan and now live and work with their families in Washington, D.C. Their mission: to everyday fashion that’s both laid-back and put together. Their method of operation: create launch an entirely new collection of scarves every-other Monday; offer holiday and anniversary discounts; and introduce sleek staples like the “relaxed cotton tee”, their take on a modest t-shirt with long sleeves, a longer hemline, and a higher neckline. “It looks very put-together and not frumpy,” says Amany. “It’s something you’re going to look very nice in, but you don’t have to run to the dry-cleaners or sit there and iron. It’s wash and go.”

The duo launched their online-only collection Zeena in February 2011 and is seeing huge growth. Their laid-back, Midwestern approach with high-fashion touches is a welcomed resource for independent women seeking stylish, modest options.

“Without a doubt our customers have the liberty to purchase what they like,” says Amany, Zeena’s co-founder and Chief Operations Officer. “The vast majority of our customers are women who purchase via credit card or PayPal, but were sure some men are buying gifts for the women in their lives, too.”

The two sisters are kept busy creating new designs and running the business inside and out. Shoppers at Zeena will find a modern mix of tops, skirts, jewelry and scarves.

Alsundus is another one to keep an eye on 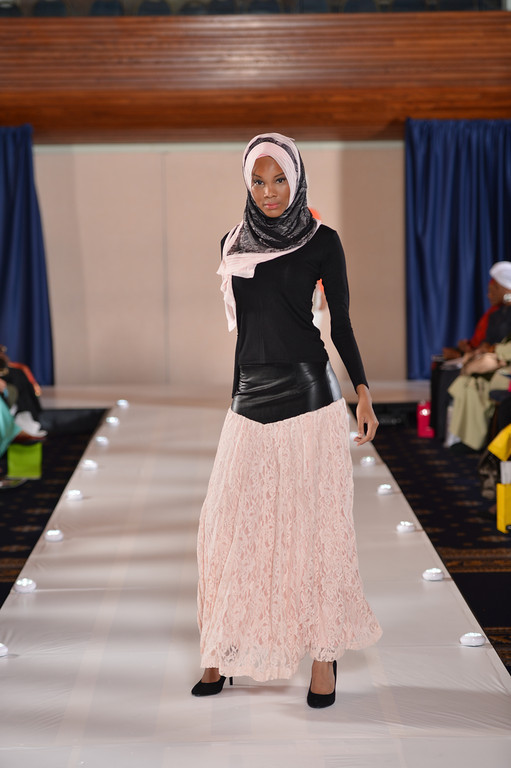 . The brick-and-mortar business, run by sisters Sabika and Sabina Makhdoom, is hugely popular on the West Coast. They also have a web presence but, like Zeena, the label gets a boost from attending major conventions and shows across the country, too. Opportunities like this in particular help the sisters to network with other business-owners and connect with their customers.

“It wasn’t until I went to school for fashion design that I realized I should really put my name on there and get together a collective line instead of just things I was making for myself and friends,” says Sabika Makhdoom. Her mission: cater to a new generation of Muslim trendsetters.

“Creativity comes when you need it,” she says (as if the process were that reliable or easy). She enjoys combining hard and soft, leather with lace. The latest spring and summer theme was “motorcycle chic meets romantic”.

Further south on the map in Australia, Hijab House is one more magical place that sprang to life in 2011. From the clothes down to its rich photography, Hijab House is “to put it simply” perfect. Their impressive website and Facebook presence tell a chic, editorial story fit for the pages of Italian Vogue.

Tarik Houchar is the visionary behind the house. Under his direction, Hijab House calls itself the “first Australian fashion company for Muslim women”. Says Houcher: “We’re launching our Eid line in September and we’re so excited. This season it’s all about being bold so we have some beautiful patterns and statement pieces.” Right now he’s partial to their Gatsby Hijab, which has a “great, feminine pattern and easy-to-wear fabric.”

Interestingly, Kanaan notes their biggest challenge in starting the business was appealing to the small but growing Muslim community in Australia. But the Aussies are coming around. Last March Hijab House was a featured designer at Fashion Fighting Famine in New York, and the fan-base is growing.

“Our ideal girl is someone who’s fun, fearless and sociable,” says Kanaan. “Someone who has her own style. We love seeing girls come in and make something their own. We also love the girls who are putting on the scarf for the first time.”

Plenty of women nowadays are ready (and equipped) to shop for what they love instead of simply what’s available. Makhdoom wants most of all to provide a unique service to shoppers. “I used to find myself going to the store and buying something just because it was modest,” she says.

“I don’t want anyone to have to do that. One of the best parts of having a retails shop is that I get to hear what people are looking for.” She keeps a log of trends and requests from her customers and balances these suggestions with her own creative musings.

For any new entrepreneur to really stand out, those little extras can make all the difference in the world. In August Zeena featured a Ramadan fashion guide to help women get dressed easily during a month filled with dinner parties, fundraisers and activities. And in September, Kanaan says, Hijab House dialed up the fun with a “Vogue Fashion Night Out” and “Vintage Night” for style watchers.

Makhdoom says some of her customers will drive two hours just to get to her store. “As I was doing my spring and summer line [at one point] I was feeling disheartened,” she says. “Then out of the blue a customer who had at one time bought something from my store called and told me, ‘I am anxiously waiting for you to come out with your new stuff.’ You have no idea! it made my day.”

Jondy’s advice to brave souls who want to go into business is: Educate yourself.

“You can’t roll out of bed one day and decide to start your own company. It’s a lot of work and a lot of research. For us it took years to finally launch; local businesses in the D.C. area helped us through.”

Even so, it appears the timing is right for the new hijab, and companies like these are off to a running start. Where the yellow brick road ends, nobody knows.

Please click on this link to make your contribution. Or,