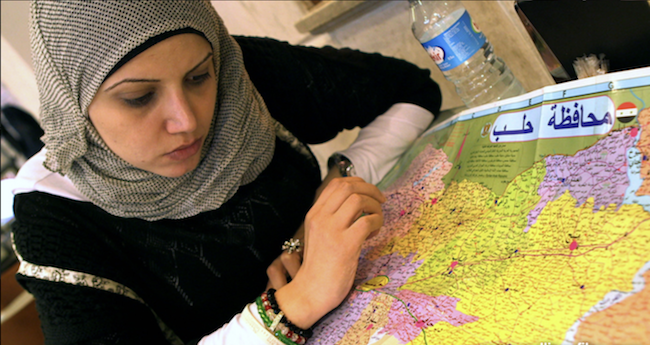 Summary: A review of the documentary Red Lines, which follows two activists fighting for democracy in Syria

In the last five years the news in Syria has gone from bad to worse. It’s an unravelling course of chaos and confusion. And when you live in the West it can all seem very remote. After all, very few are hopping on planes en route to this country bordered by Turkey, Lebanon and Iraq. So we are left to wonder and to speculate: What does revolution look like over there? What does it sound like? Who is doing what in this story from day to day? How did it get to this point?

The country’s upheaval has become a humanitarian as well as political inconvenience for the rest of the world–one that could be relegated to a three-minute news brief on public radio, or an image on Facebook, or online commentary–were in not for this film which invites us to see, hear, imagine and understand the reality from a compelling angle. The documentary Red Lines by Spark Media has already garnered numerous awards for its powerful telling of current events.

In Red Lines directors Andrea Kalin and Oliver Lukacs give an intimate look into Bashar al-Assad’s Syria. Mr. Assad assumed rule of the county in 2000 after his father’s death. It soon became apparent his promises of a democratic nation did not match his actions. Instead, he gave orders to “crush dissent.” He ordered military to open fire on crowds painting anti-government graffiti on the walls of a school. But that was just the beginning.

This story begins in 2012 (just post-revolution) and offers a very intimate play-by-play of the challenges faced by two activists who are embroiled in the crisis. Mouaz Moustafa is an American lobbyist to Syria based out of Washington. He grew up in a Palestinian refugee camp and immigrated to Arkansas as a child. Mouaz partners with wealthy socialite-turned activist Razan Shalab-al-Sham to set up a network that smuggles humanitarian aid to the people of Syria, and tries to solicit help from abroad. Both are fairly young and are looking for opportunities to ease the suffering in their country turned upside-down. 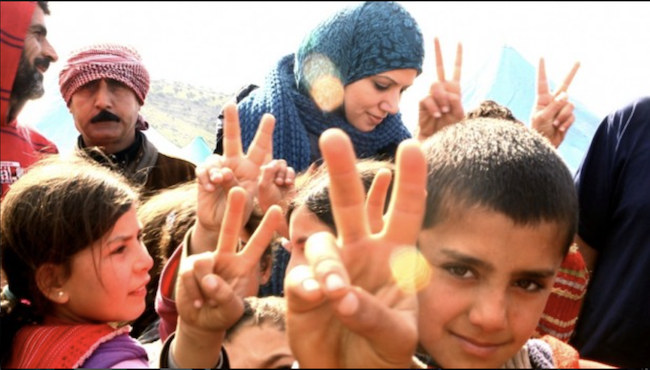 The first thing you note is Razan’s fierce determination. She is fearless and tough. She has razor-sharp intentions for a 26-year-old woman who originally wanted to be an English literature teacher before the revolution changed and shaped her life.

In a way, because of this documentary we as viewers are privy to some of the most stark, uncensored reporting of modern revolution to be found anywhere else. That is thanks to the internet, YouTube and social media reporting from protesters and activists on the ground that connects with millions of eyeballs worldwide. The value of this cyber highway is not lost on Razan and Mouaz as they seek–perhaps more than anything else–the recognition and support from individuals and countries abroad.

In the course of the film Razan scrambles to design and distribute uniforms for a civilian police force. These officers will help to provide food, supplies, housing and medicine to the homeless. She works to organize a civilian council of women to be activists on the ground. A woman with the Syrian Women for Change states matter-of-fact, “There’s been no real election here in 50 years. We’re dying to vote.”

Razan’s idea is to establish a model democratically run village. “…Then the U.S. can play a constructive role … otherwise we are stuck in this chaos.”

Meanwhile, Mouaz uses his political pull to activate Americans. This includes lobbying for the support of U.S. Senator John McCain. 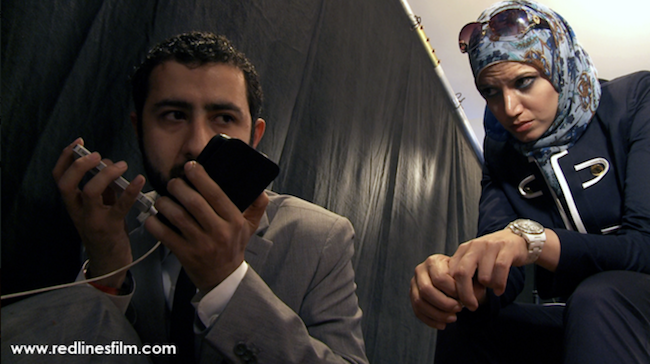 But aid is a complicated issue. Government officials in Washington and London are unsure how to support the Free Syrian Army, the “true” rebels, without inadvertently bolstering the extremist groups who are slowly moving in to reap the spoils of chaos and exert Islamist control. Even Razan must choose her collaborators carefully.

Things take a dark turn when the Syrian military goes after civilians in the village of Homs. Marie Colvin, a reporter who was killed shortly after this report, says, “There are no military targets here” … (hence the red lines that the U.S. is hesitant to cross). When sixty to eighty percent of hospitals are destroyed during fighting Razan helps to smuggle Italian mobile aid stations. The inflatable stations; however, keep collapsing.

The foreign aid situation is particularly eye-opening. We might struggle to understand why Western countries cannot get resources to the hundreds of displaced children left without mattresses, blankets and food.

The documentary explains that most foreign aid is routed through the U.N. and is therefore intercepted/blocked by Assad, who is responsible for allowing aid to enter into the country. Here, too, the film takes us from Washington boardrooms to makeshift Syrian orphanage and back again. We are privy to the hotel rooms, long hours and phone calls that make up the less-than-glamorous side of activism. It takes cooperation across oceans to ease the suffering of real, live children on the ground.

Like any blockbuster film there is a turning point. But this story is not Hollywood fabrication. When one of Razan’s men is captured by Syrian Air Force Intelligence Razan fears for their tenuous headway. Her information is compromised. Not only that, she fears for her own life and the lives of others in her network. 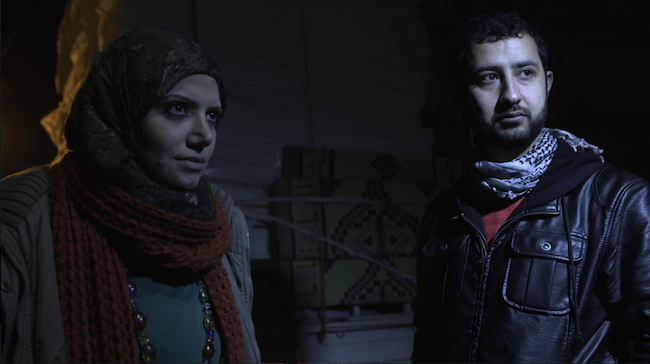 Spring 2013 marks the third year of the Syrian conflict. Washington is still hands-off. And then the unthinkable happens. Assad launches a chemical attack on his own people.

The music that carries Red Lines is breathtaking. The ultra-real images cannot be unseen. The film is documentary, but more so it is a call to action. One gets the nagging sensation that it is far too easy to take democracy for granted in the large, free world. So activists like Razan and Mouaz must take us by the shoulders and show us another reality … another people’s struggle for freedom and support.

This documentary is a must-see. For now it is a vital marker in time, although the story is far from over.