S.K. Ali, young Muslim female writer, tells a story of a teen girl who keeps silence against a sexual abuse of her Quran-reader cousin in Saints and Misfits.

This story was originally published on Muslimah Media Watch.

There was an excerpt of Saints and Misfits by SK Ali before the book was published in Entertainment Weekly. It  read:

“I stand and cringe at the sucking sound as my swimsuit sticks to me, all four yards of the spandex-Lycra blend of it. Waterfalls gush out of the many hems on the outfit, and, as I hobble out of the lake, more secret pockets release their water. I’m a drippy, squelchy mess, stumbling toward Dad and Linda, picking up tons of sand as I move. I refuse to look around in case I see someone, everyone, watching me.”

Then, I knew I needed this book before I even knew what it was about. For those of you who have never worn an Islamic bathing suit, this is EXACTLY how it feels and sounds, like to wear one. Someone out there knew what it was like, and it’s an amazing feeling to read yourself on a page. There’s an instant connection, rather than a feeling of longing. Immediately, I felt invested in the character and excited to see where the journey would go. 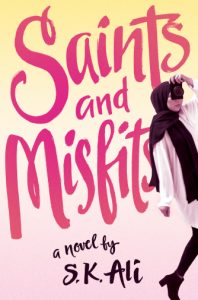 Saints and Misfits is the debut Young Adult novel by SK Ali. The book tells the story of Janna Yusuf, a 15-year-old hijabi Egyptian-Indian American Muslim, and the aftermath of her sexual assault at the hands of her best friend’s cousin. The cousin or “Monster” as Janna refers to him, is a pillar in the community because he’s memorized the Quran.

In the wake of the #Metoo campaign, this novel feels all the more important. The focus is on a Muslim sexual abuse survivor, and how she lives with the secret of her abuse while having to not only interact with her abuser, but listen to people praise him whenever he’s mentioned.

In the book, Janna tries to navigate how to live with the Monster’s ever-suffocating presence while living her life. She’s further dealing with family problems: her parents are divorced, her brother, Muhammed, just moved back home forcing her to room with her mother, and he’s pestering her to be a chaperone on his dates with a girl she has dubbed “Saint Sarah” because she’s what Janna thinks is the perfect Muslim. Oh! and she has a crush on a boy at school named Jeremy.

Saints and Misfits is delightful and important book because it presents  a critique of a  Muslim community from within.  Its portrayals of the different types of Muslims, show that we are not a monolith.

Saints and Misfits is a character-driven story, and Ali does a great job of smashing through tired stereotypes effortlessly. For instance, Janna’s secular father thinks his ex-wife is forcing Janna to wear hijab, but the author makes sure to emphasize that it’s Janna’s choice. There is the Doc Marten wearing, no holds barred, Sausun, who decides to wear niqab and Janna feels like “she looks like she’s excused herself from the proceedings of life’s unnecessariness” But we’ll learn later this is far from the truth.

Throughout the story, we also learn that the previously mentioned Sarah may not be the  “saint” Janna believed her to be, after all. Hence, no character is a caricature or one-dimensional. That’s why it’s so important to have Muslims writing Muslim characters.

So many times, while reading, I stopped and thought, “Oh my God, that’s me” or “that’s so true!” I found myself nodding along to Mr. Khoury questioning the Monster about his knowledge of Quran only to find him lacking; “So this gold guy here who memorized what he doesn’t understand, what is the big deal?” How many of us have dealt with people like these? Hiding their hypocritical selves behind their perceived Islamic “knowledge.” 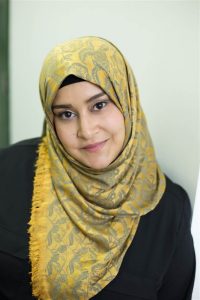 Ali’s style draws the reader in, takes them on a journey of laughs and frustration and tears. And underlying it all, there is this stomach clenching tension that comes whenever the Monster is mentioned or appears. Janna struggles with revealing her secret but she knows “she can’t tell [her cousin] because she’d never believe such an unholy thing.” The “of him” goes without saying. Like most cases of sexual assault, the burden of proof falls on the victim, and Janna is no different.

Saints and Misfits does not tie all loose ends into a neat, little bow.  By the end, some readers may feel let down by the incomplete resolution. To me, it felt like real life. It felt like a step toward healing.

Throughout the novel, Janna thinks of herself as a Misfit and an outsider. But as her assault comes to light, she’ll find that she’s had people in her corner all along. Janna is still learning and she’ll question a lot things about herself and others, but her Islam is not one of them. That was the most refreshing part of all. Finally! Muslims make mistakes. It doesn’t mean they regret being Muslim. It just means they’re human.

Read this book! Share it with Muslim teens who need to see themselves in media. Inclusivity and representation of the Muslim community make this book a must have for Muslims but its discussion of sexual abuse and its aftermath make it a must have for everyone. Saints and Misfits has been nominated for awards and landed on multiple “Best of” lists. It is well deserved.

An Entertainment Weekly Best YA Book of 2017
A Kirkus Top 10 Contemporary Teen Novel of 2017
A 2018 William C. Morris Award Finalist

Saints and Misfits is an unforgettable debut novel that feels like a modern day My So-Called Life…starring a Muslim teen.
There are three kinds of people in my world:

1. Saints, those special people moving the world forward. Sometimes you glaze over them. Or, at least, I do. They’re in your face so much, you can’t see them, like how you can’t see your nose.

2. Misfits, people who don’t belong. Like me–the way I don’t fit into Dad’s brand-new family or in the leftover one composed of Mom and my older brother, Mama’s-Boy-Muhammad.
Also, there’s Jeremy and me. Misfits. Because although, alliteratively speaking, Janna and Jeremy sound good together, we don’t go together. Same planet, different worlds.
But sometimes worlds collide and beautiful things happen, right?

3. Monsters. Well, monsters wearing saint masks, like in Flannery O’Connor’s stories.
Like the monster at my mosque.
People think he’s holy, untouchable, but nobody has seen under the mask.