Muslims in the U.K. celebrated modest fashion one week after Eid al-Fitr

Thousands of people gathered to watch the free catwalks in the main hall of the shopping center at Westfield Mall in Shepherd’s Bush, London. The event was to celebrate U.K. Muslim culture, Mediterranean food, and modest fashion over the weekend of June 23rd and 24th.

The visitors were able to watch live catwalk shows that spread over the course of the two days in six different shows. More than 17 brands were featured on the runway from six countries including Indonesia, Pakistan, Malaysia, Dubai, Canada and the UK.
Modest Fashion Live comes only two months after the London Muslim Lifestyle Show that was held at Olympia Exhibition Center. The current event featured many of the same designers from the previous show.

“[Muslim]people are always happy and it’s a great environment to be in.”

“Doing this in Westfield, and doing it a week after Eid was so we can let other brands and other communities (outside the Muslim community) feel welcomed,” said Adhiba Dar, the Sales Director at Algebra Consulting, which organized both events. “When you use the word ‘Muslim’ people feel a little bit alienated.” 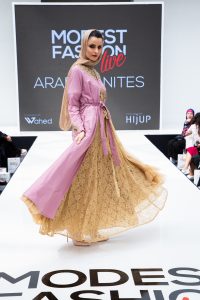 To break down the barriers between the Muslim consumer market and the mainstream fashion industry, and to build a bridge to Muslim’s untapped market in fashion industry, the event included mainstream brands such as Hobbs, French Connection, the White Company, Jigsaw and Aldo.

“We’ve been knocking on the brands’ doors for a very long time, but now, all of a sudden it’s fashionable to be modest and also very profitable,” Dar said. “Having the support of these brands is phenomenal.”

Muslim community is the fastest growing consumer group in recent years. Only in the U.K., the Ramadan economy was about £200m in 2017.
“This (Muslim) economy is predicted to be worth $4.7 trillion within the next few years, so for brands understanding the potential of this market … the opportunity is huge,” said Waleed Jahangir, CEO of Algebra Consulting. “Consumerism and commerce has no color.”

The main theme for the collections on the runways was to provide clothes that were ready to wear. Designers and brands tried to tap into the overall atmosphere of the mall by positioning their clothes and accessories easy to obtain.

“When you use the word ‘Muslim’ people feel a little bit alienated.”

Other brands presented a more casual look. Jenahara’s clothes were mostly monochrome, with a slight pop of color in either the hijab or a patterned top. Khaadi displayed a variety of patterned tunics paired with skinny jeans, while Hijup Basic stuck mainly to one-color pieces.

Arwa Hanif, one of the designers for Nur Jahan, a new clothing line from Dubai, agreed with what Lemos explained. She wants her design to be ‘very comfortable’. “We started this family brand because my mother, two sisters and I were inspired by the strength and artistic genius of Mughal empress Nur Jahan,” said Hanif. To explain the spirit of their brand’s name, Hanif said that Nur Jahan, an Indian empress invented particular type of Indian pants because she wanted to ride horses. “Nur Jahan’s creations were based on many values that are important to modern women today, such as practicality and elegance,” said Hanif.

The following videos are the raw footages of the catwalk shows we recorded for your review. Please subscribe to our channel at Goltune News YouTube Channel

London Modest Fashion Live aims to break down barriers between #Muslim consumer #market and mainstream fashion industry to build a bridge between these two cultures.

Tal Imagor, Goltune News correspondent in #London recorded following footages for you to view. Please subscribe to our channel, write us your comment, like us, and tell us about your fashion tips.

London Modest Fashion Live aims to break down barriers between #Muslim consumer #market and mainstream fashion industry to build a bridge between these two cultures.

Thousands of #Muslims and on-Muslims gathered to watch 17 brands’ collections on the main stage for the catwalk. #Muslim community is the fastest growing consumer group in recent years. All major brands are paying attention to this new and wealthy demographic.