There were butterflies in my stomach as I attended my high-end modest fashion show in one of Europe’s major cities. For years I’ve struggled with dressing modestly, finding the apparel that best suits me. Now, I felt as if my dream was becoming a reality.

As I was determined to see all of the dresses and designs available, I found a front row seat for the event. 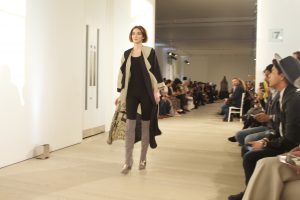 One of the designers who captured my interest was Suraya Sharifuddin, a Malaysian designer with the Maslea label.  Sharifuddin used velvet in her work, a popular fabric since 2016. Velvet was used in many different designs, from dress to jumpsuit. I found the Sharifuddin designs unique and special.

I think designs from different countries and cultures are amazing. But do they really work well on the streets of a city like London? Yes, assuredly!

During the later portion of the show, elegant dresses for parties and special celebrations were presented. The look was elegant, fresh, and authentic, and I was delighted to see these intriguing designs from Arabia and Asia. 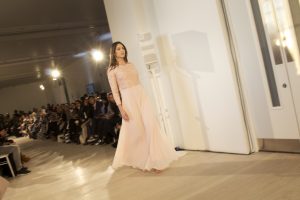 When it comes to occasional wear, authentic clothing from other countries can easily be adapted to the UK, especially in cities such as London, which are bursting with culture and diversity. One of my favorite design venues was the Art of Heritage from Saudi Arabia. I loved seeing the Arabic heritage captured in many pieces from both very traditional to modern. Absolutely gorgeous!

And of course, such an event wouldn’t be complete without a time to mingle. After the show I went to the bloggers room to grab a delicious strawberry mock-tail and catch up with some of my blogger/ influencer friends.

I was also able to have a picture taken with the great Dina Tokio, who had been constantly on the go during this event. As she was its main promoter, she was exhausted by the time I found her. Nevertheless, she was very happy to see everyone and wanted to spend time with me and other bloggers.  As social media is an extremely influential tool these days for the promulgation of fashion, many jumped at the opportunity to vlog (for YouTube), Snapchat, and Instagram this event As a true believer in modest women empowerment, I feel like I now have the confidence to tackle comments related to modest dress (such as, “Don’t you feel hot in so many layers?’) I can finally answer, “No, I don’t feel hot, but I certainly look hot in such fashionable layers that illustrate my modesty.”

At the show, I spoke with my favorite designer Suraya Sharifuddin. During our conversation, she said the following: “Thank you for attending LMFW. I am hoping to expand my business into the UK and look forward to future gatherings like this in London. Malaysians love London, so to find such a place where we can sell our clothes is very important for us as this not only helps our Malaysian businesses grow, but also helps our Malaysian people access our brands in a more easy way. I love designer clothing and handbags, so I believe that Haute Elan is seen as designer when it comes modest clothing.” 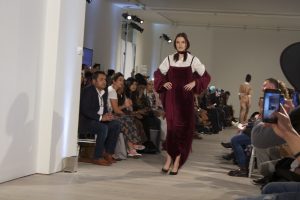 I also spoke with some of my fellow bloggers, and they told me that they attended and promoted the event because they strongly believed it when Dina described LMFW as “Revolutionary”.

Most of the people attending the show were Muslims, but I did notice a number of non-Muslim participants as well. It made me realize that Muslim women are not alone in their desire to promote modesty. Actually, the desire to dress modestly is growing in popularity, and  I think we will see more modest fashion and design in the coming years.

Romy Ahmed call herself an optimistic hijabi. She has a job in finance industry, but her heart is with modest and chic fashion