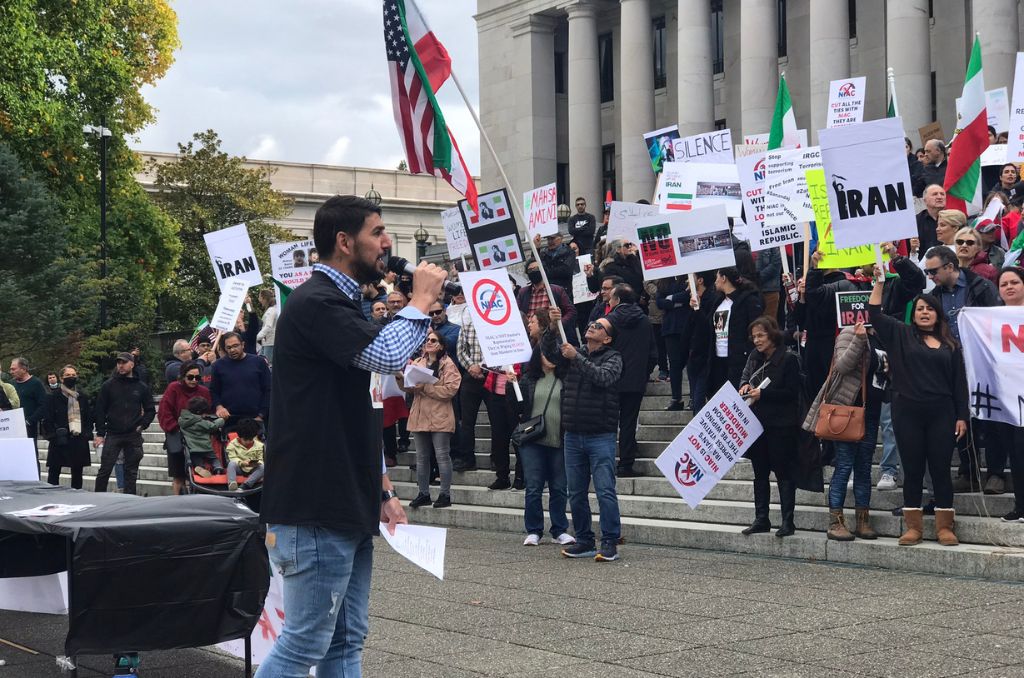 A large number of Iranian Americans gathered at the north side of the State Capitol Building in Olympia last Saturday to voice their distress over the Iranian regime’s brutal treatment of its people.

The protesters were chanting a few iconic phrases that have been inspired after the death of Mahsa Amini, a 22-year-old woman arrested by morality police in Tehran for wearing her hijab improperly. Amini passed away in hospital while still under police custody.

Amini’s death sparked a nation-wide protests in Iran that quickly became an international phenomenon in support of women’s rights in Iran and other Muslim countries. “Death to dictator,” “Justice for Iran,” Justice for Mahsa Amini,” and “Say Her Name: Mahsa Amini,” were a few chants repeated in unison among protesters. 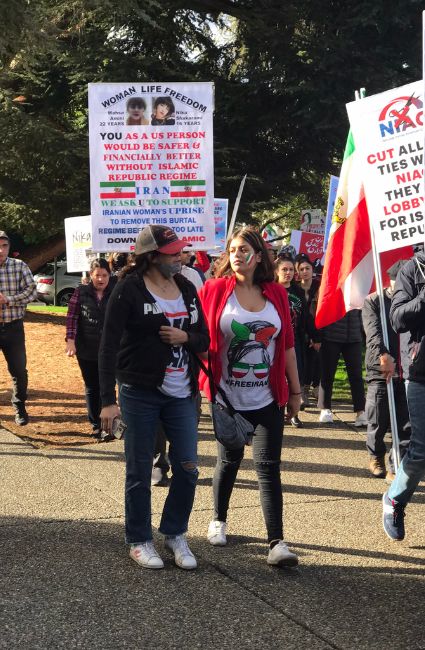 “The Iranian regime is killing people, especially young people,” said Mona Ebrahimi, a 40-year-old psychotherapist from Kirkland. “We want to be the voice of Iranian people in the US and around the world. After I saw footage from Berlin where people were chanting Mahsa Amini’s name, I couldn’t stay home” she said, referring to a recent protest in Berlin where more than 80,000 people showed up in solidarity with the Iranian people.

“The acknowledgement and support of the Free Iran movement by elected officials in Washington state is important,” said Negheen Kamkar, Policy and Engagement Strategist at Washington Association for Community Health.” Their support also says ‘we see you and you are not alone.’ This is what Western media need to see, and what President Biden and the United Nations need to see.” Kamkar said.

Somayeh Nargesi, professor at the Pacific Lutheran University in Tacoma, was one of the hijab-wearing protesters rallying with hundreds of other people on the streets of the capitol campus. “We are standing at a crossroad in the history of Iran where we know who is right and who is wrong,” she said. “In my religion, to be quiet against the oppressor is a crime. I really believe if anyone who does not consider the current Islamic regime a criminal regime, she or he is not a true believer,” Nargesi said.

The protesters walked through a long line of designated paths across the campus. When people couldn’t hear the chants repeated at the beginning and end of the line, some people took it upon themselves to shout the slogans while at the middle. Raheleh, a young woman walking along the path, was one of the people who created the excitement.

After a long rally, the crowd eventually came back to the north side of the capitol building, where they started.

Humeira Bakhtiari, a human right activist and one of the organizers of the rally, took the microphone to recite the names of the people got killed by the Iranian regime. After every name, audience members said “present,” remembering and honoring their absence among themselves.

“We do not want negotiation,” Bakhtiari said. “The Iranian regime is criminal. They are killing our sisters and brothers. They are kidnaping young beautiful people from the streets and returning their corpses after rape and torture. This needs to be stopped,” she said. 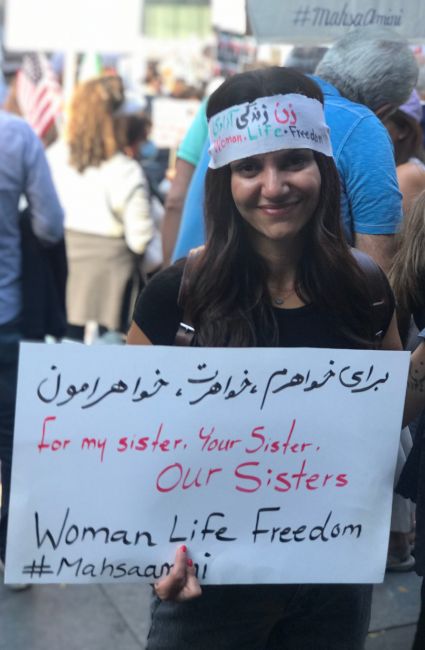 Not too far from the crowd, they were a few bystanders watched and listened to the speeches. “This is very powerful,” said Marcia David, a retired lactation nurse; who lived nearby and got curious about the voices she was heard in distance. Marcia David and her husband walked over to see what was happening at the capitol. “I love the fact that they both speak in English and their own language. I’m very glad they feel safe to do this. Just a few minutes ago, a woman passed by and gave a big smile. I felt warm at heart,” she said while cozying up in her husband’s arms.

“I’m really touched to see many men in the protest who came over to support women’s rights,” said Annette Massari, a 28-year-old mom standing by her partner Marissa Morales, who was holding their infant baby. “I organized a rally for women’s rights in Florida. We only had women in our rally. Of course, it is important that victims stand for themselves. But it is equally important that they feel they are supported by others. Here I see the celebration of life, as well as mourning, and I see the unity,” she said.