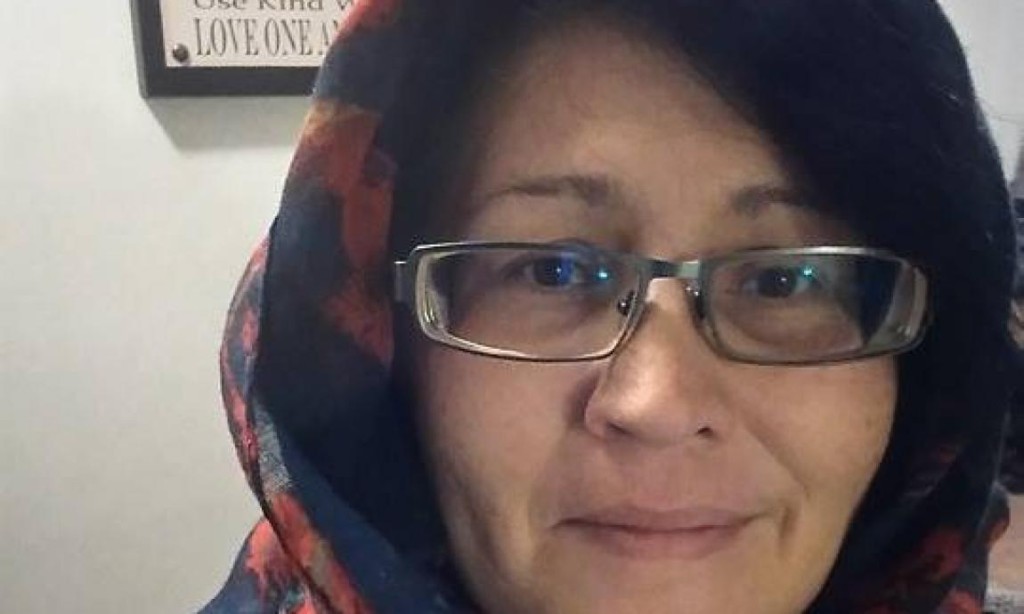 With her permission, we took a photo of Ms. Crowe’s facebook page

Jackie Crowe is not a Muslim. She is an activist and a Metis, an indigenous person of mixed American Indian and European descent. Crowe started wearing hijab since December 1st, to show her solidarity with Muslim women. She lives in Saskatoon, Canada. We talked with for an interview.

Goltune: Why do you wear scarf?

Crowe: Just seeing what was happening after the Paris attack, and the recent attack in California; I was watching news, seeing that Muslim women were attacked by various people. I felt really saddened in my heart for these women who are just going about on their daily life, walking down the streets, taking their children to school, whatever, you know.

After I see men attacking women, I thought, there is something really wrong here.

Crowe: I just think people should not treat other people badly because they dislike their hijab, or because those people [Muslims] love allah, or whatever  it is not right.

Crowe: I work in my community, I live in my community. People know me. So, when they see me with my hijab; they ask, why do you wear scarf Jackie? And then, we have a conversation.

Goltune: Do you have an example?

Crowe:I had a conversation with someone yesterday, she said to me, well, we do not want them to changing our values. then I said, what are those values? this person was so stumped that she couldnt even answer me. another person told me this country is founded based on Christian values. then, I asked, what thats mean? I asked, what Jesus said? what was his values? I said.

I really challenged them to think what is it that they it is a Christian value.

Goltune: What do your friends say?

Crowe: in one occasion, one of my friends asked me why I wear hijab. I said, I want to protect our women. I want to be a safety net for one another. And also I stand against any violence. I tell them this is Canada.

Goltune: Why is it important to you to protect women?

I grow up in a metis family. My father was racist against his own people, because he was lashed, he was beaten, he was told he was nasty, he was lazy, he was dirty.You end up with this horrible feeling of who you are, as a person.

I grow up hearing lots of derogatory comments. Why do we feel that we are so great, and other people are not? No, we have had behaved horribly toward women and children. The track record is not ain’t great.

Crowe: I think men are also important. I think violence happens to men as well. But violence against women occurs more often. I think we, women, are the life givers. If one cannot respect women, who give life, then he respect anything.

Goltune: What do you think about Mr. Trumps comments against Muslim?

Crowe: Oh, I think he is crazy. He is politically motivated. He wants people to be afraid. He is cooperate, he is 1 percent, and all of us who are not in that 1 percent category  he wants to dehumanize us. No, I am not in his camp. I do not want to hate people.

Goltune: Is it going to get worse?

Crowe: I do not think we should allow these lies, gossips, racism, anger, hurtfulness, meanness can infact us. We need to standing up, by just speaking up, and it is so important for people to keep the discussion going. We can point fingers all we want, but that is not going to solve the issue.