Increasing number of 35,000 people signed a petition demanding Nike to recall one of its leading brands of sneakers alleging the design on its sole resembles the world “Allah.”

The petition says it’s “outrageous and appalling” of the global shoe brand to allow the name of God on the sole of the Nike Air Max 270, “which will surely be trampled, kicked and become soiled with mud or even filth”.

A Nike spokesperson denied these allegations, stating to Fox News that “Nike respects all religions and we take concerns of this nature seriously.”

“outrageous and appalling” of the global shoe brand to allow the name of God on the sole of the Nike.

“The AIR MAX logo was designed to be a stylized representation of Nike’s AIR MAX trademark,” the spokesperson said in the statement. “Any other perceived meaning or representation is unintentional.”

The petition aims to raise close to 50,000 signatures. 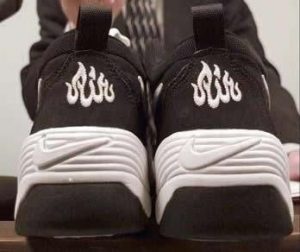 Nike ran into a similar problem in 1997. The Council on American-Islamic Relations protested the company’s logo on certain athletic shoes, saying it resembled the word “Allah” in Arabic script. Nike said at the time it regretted any misunderstanding, explaining that the logo was meant to look like flames, according to Business of Fashion. More than 38,000 pairs of sneakers worldwide were pulled by the company.

“Nike respects all religions and we take concerns of this nature seriously.”

Nike is not the only brand facing pressure to pull out its signature sneakers off the shelf. Addidas plans to remove sneakers dedicated to Black History Month amid backlash. Read more of that story here.