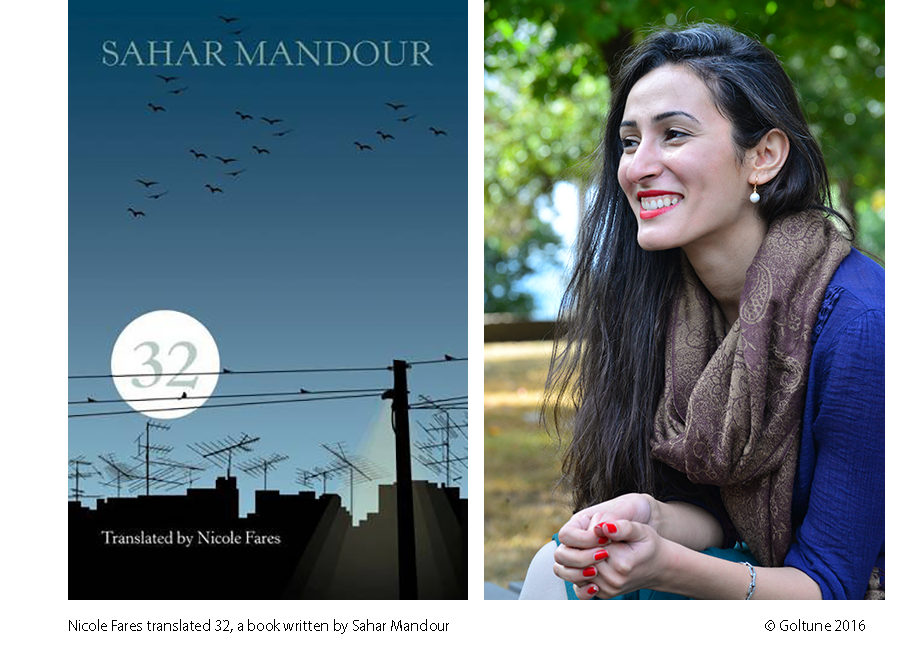 Nicole Fares is a translator. She translates Arabic novels into English books. We talked with her about her latest book “32.”

Nicole Fares speaks passionately about somethings she loves to do, something she has spent her young life doing it. Fares translates Arabic novels into English books. In her translations, Fares tries to make Middle Easterners, and their stories, relevant, normal, and digestible for Western readers. She wants to transform those lives from exotic and strange to corresponding and normal.

We spoke with her about her latest work “32,” written by Sahar Madour and translated by Fares.

Nicole Fares: I met the author about three years ago. We had met through a mutual friend of ours. Later, when she went to London to pursue a degree, we stayed in touch throughout the entire period I was translating. I know her pretty well as a writer.

I have her other three books. Honestly, it was a battel between translating Beiruti Love or this book. But I felt this book tackle a lot of modern issues. Because most of Lebanese novels translated in the West are about Lebanon civil war. Those novel repeat the same issues that we know very well know about. But the reality of the situation is that Civil war ended. The generation living in Lebanon today, especially the younger generation, they have to deal with the residue of civil the war. They have to deal with the issues that, in lot of ways, much more complicated the ones during civil wars, which was more black and white.

NF: The main character in the novel does not shy away to naming politicians or people in power in her narrative. She is not someone afraid, embarrassed or shy, in any way, in poking on politicians. Which is younger generations in Lebanon tend to do. Most of the assassinations she talks about in the novel are modern time assassinations. She mentions car bomb, suicide attempts of suicide bombers … all of those issues that younger generation have to deal with are psychological issues. Remember at some point [in the novel], the narrator must assess the car …. And this is something Lebanese do. So you have to assess the car to know whether the car likely contains a bomb. Or to check under the car before get into it.

Goltune: The tone of the book is different. How come?

NF: The tone was somewhat challenging for me. I had to make sure the American English reader understands that someone who is very playful, very funny, and a character of a younger Lebanese generation, and someone constantly dodges and tries to avoid reality. I think they have to do that in order to secure their well-being and mental stage and emotional stage. She is dramatic, and she is young.

Goltune: In the intro, you mention the main character “scrutinize” her soundings, how so?

NF: In the novel itself, we see the narrator walks on the streets and describes what she sees. She leaves no one untouched. She talks about politicians, she talks about the streets, she talks about people, she differentiates between younger and older, she differentiates between men and women. She scrutinizes every single area around her, even the architecture. She leaves nothing untouched. And she is not shy about giving her own opinion of it, she is very loud about it, and she makes sure you understand what she tries to do or say.  The book, not only, gives you a very detail description of what is Lebanon today, we also get information about what younger generation thinks, and how they feel.

Goltune: What did you learn from your translation?

NF: It has taught me how to translate from one culture to another culture, how to bridge Eastern culture close to Western culture without alluding its identity. For instance, I had chosen to keep French words and Arabic words in the novel on purpose, because it’s what make the Lebanese identity.

Goltune: What were biggest challenges in your translation?

NF: I had to reread lots of stuff and ask myself, would have a younger English speaker, or would a younger American, speak this way. If not, so then how to say things. Then, I started turning into my own students in classrooms, just noticing some of the words they use. For instance, I noticed they use “like,” a lot. IT is more like like like. So, I stated to add more of that into the conversation. It was, somewhat, challenging for me to capture that voice in English. At the same time, it was entertaining to come out of my comfort zone and trying to step into someone else’s shoes.

Goltune: Were you loyal to the original work?

NF: Of course I stayed loyal to the original book. But part of being loyal to the work is to make sure the Western recipients, who are reading the book, have the same understanding of the Arab recipients or readers. I do have to over-explained some of the issues in the book to make sure they are comprehended in the English version. And other times, especially for the jokes, I had to completely rewrite them one way or another, because jokes, that may easily have understood in the Arabic culture, may make no sense in the English language. I had to ask myself what is she [writer] trying to do. Is she trying to be funny, but at the same time relate to specific point.

NF: I am Lebanese. I try not to take a personal mission to translate Lebanese novel. But if I am translating Lebanese novel from a younger generation whose narrator is closer to my age, then of course I have to apply to my own experience and ask myself ‘how did it feel when I was there, how did it feel when I went through something like this ..’ of course, it makes it easier to know how to communicate the book with Western audience. And know how to get them to understand the situation.

Goltune: Is the author happy with your work?

NF: Throughout the entire translation, I was communicating with the author. I would send excerpts of my own translation. She felt I captured her voice very well, which is great. Because part of getting to know her personally, I tried to adapt her voice into the translation. She gave me the impression that I stayed loyal to the book.

Excerpt of the book:

She reads and I think. How can I write the ending while the events are still taking place in real life? I have to find a stopping point.

I am not going to write about my friends and me in my next novel – it’s going to be pure fiction. I’ll probably think of some ideas by then, and then might be good ones, too. I smile and head to the kitchen to pour myself a glass of young rose wine.

“You are reading the novel, you need to focus.”

“But your novel makes me want to drink. I’ve reached the part about the Pacifico party.”

“Ha ha. My story must be working, then. It must be good.”

“Your story? What are we? Extras?”

“Of course you are. Extras in my story, as usual.”

We laugh. We drink. She reads.

“Okay, can I finish reading the story?”

“There is a sentence in my head that I cannot figure out where to place in the text. Can you keep it in mind while you’re reading so you can help me find somewhere to put it?”

“There’s something about Beirut that makes the ending obvious from the beginning.”

Well, mom, twenty-four days from now I’m going to be thirty-three. I’ll be as old as Jesus! I’m going to die soon.”

“Qui, that’ true. You wore us out at thirty-two. So what are you going to do when you are thirty-three? Wipe us out? What’s your thirty-three going to look like?

“why should I? I’m still young. Do you remember what that was like?”

“I didn’t mean you worrying about your stinking age, I meant my birthday. Have you thought of my gift yet? You’re running out of time Zeezee deary, you better act fast.