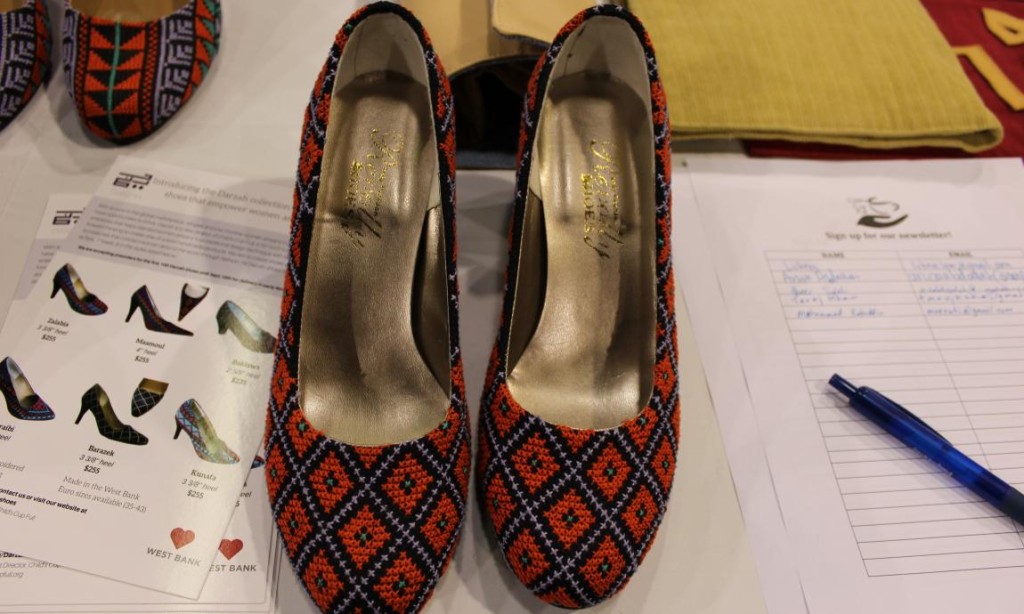 A pair of shoes embroidered by an artisan in West Bank

In order to keep any  Childs Cup Full in a refugee camp, Janette Habashi thought she must keep the mother employed. Habashi, Associate professor at the University of Oklahoma in the Department of Human Relations, who is Palestinian in origin, could sympathize with a mother when she had to endure the pain of seeing her child(ren) go hungry.

Habashi and a few of her students started Childs Cup Full, or CCF, in 2008. The project grow from training and employing refugee women in Jenin, West Bank, to make handmade childrens toys to now making beautifully designed shoes and jewelery. Some of those handcrafts will be at display for sale this month and next month in Virginia and New York trade shows.

Habashi: I think everyone should have opportunity in life. My connection was working with refugee children and my area of expertise is education. I told myself, Okay. Lets do something with education. With a group of student from the University of Oklahoma – Tulsa, we started Childs Cup Full.  But after a while, we realized that we could have a greater impact if we work with the mothers.

Habashi: Children [in refugee camps] are affected by the situation and circumstances at all times. Even if we secured their education, when they go home, theyre going to fear the instability of their household. So you need to make sure that your intervention is going to create stability and sustainability. If you only tackle one dimension, then that means that you have created a deficit. So thats why we change our approach of employing the mothers in order to secure a future for their children. if mothers are employed or they have sufficient income, the children would benefit the most.

Goltune: What is your mission?

Habashi: Well, currently, were looking for opportunities to expand. So were looking at three things at Childs Cup Full. We want to hire more women artisans in the West Bank in order to make beautiful products. Weve been approached by several organizations to help them market their products. So thats an opportunity to expand and employ more women. The other opportunity is were looking for partnership outside the West Bank. Thats why were working with designers in the US and in Britain. Were working to market our products in different fashion shows. Were also working with higher education in England and the US.

Habashi: There was a huge discussion in the beginning. We faced with a question of do we want to create a business or do we want to create a non-profit?  So I did my research. The answer for Childs Cup Full was social entrepreneurship. Social entrepreneur is different than entrepreneur. In social entrepreneurship, you have a social target. Its not only the profit. You cannot evaluate it only with money, but you have to evaluate it on the socioeconomic impact,  So the end profit for us, its not only money. The money should go back to the project to benefit the community and the women and the children.

Goltune: What is your biggest challenge?

Habashi: People are traditionally thinking about the Middle East as a war-torn area. the challenge is, we as the Middle Easterners, were shunned to modernize our products. One advantage of Childs Cup Full is that Im here and they are there. So when we go there, for example, we tell them that we are working on opening a market. If we follow this trend, we may be able to capture the market. Let me give you an an example.  So the idea of the shoes. I dont know if youve seen the shoes. So the initial reaction of the Palestinians was we cannot do that. They rejected it. We had to convince them that its a good idea because the idea of Palestinian embroidery is unique and it is respected. We told them that the embroidery is something new. Nobody has done it before. We can get people to buy it. Its like the Palestinians doing an art work for the people in mainstream culture. Finally, they said  Okay. Well do it.

Were now doing bracelets. Were doing a piece of embroidery and putting it on a piece of leather and were making a bracelet. It looks beautiful. Nobody doing bracelets before, and we got the first shipment yesterday. So thats the advantage of being in the West. You understand what could sell.

Goltune: Has ever your palestinian nationality been an advantage or disadvantage of what you do?

Habashi: I think anybody could challenge anybody on their identity. But I dont want to make it as a hindrance for me to move forward. So I didnt think about itI know it could create a challenge, but I know that the goal of the organization is humanitarian. And another goal is I want to empower women and children. I want people to buy the product because they are beautiful.

Goltune: What are your dreams?

Habashi: My ultimate dream is to see the whole project to become a sustainable project. I also want to create an educational program for children. My biggest dream is to show the talent of women in the Middle East in big fashion shows. I want to show it not only in the traditional way. I want to make it trendy.