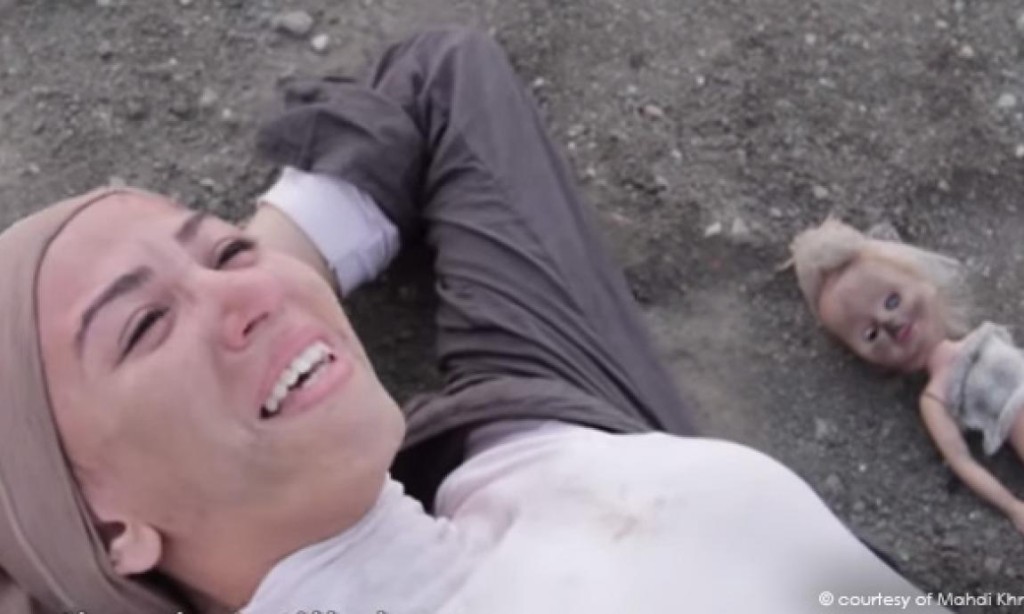 A woman in labor struggles behind a white, dingy screen while bombs crash outside the front door.

Here is yet another way to travel to faraway lands. To be inside someones home. To connect on an emotional level with people youve never met. What is the mode of transport?

Filma medium that we often turn to for entertainment value alone and neglect its ability to actually take us away to some other place. Realizing this, the artists of this years Eye to Heart Film Contest poignantly transported audiences to somewhere new.

Eye to Heart, now in its fifth year, gives voice to young, aspiring filmmakers and photographers who wish to spread a message of positive social change. The program is hosted by the American Islamic Congeress (AIC) and its partners the Seattle International Film Festival, The Harbers Family Foundation, and Here Media. Winners received recognition at Seattle International Film Festival this past summer.

As one might expect, the nature of each film varies with its country of origin. Each of the winners had its own style and message.

In Abdallah Dnewars Something Nice, we are privy to the lives of two children entrusted to each others care. We are with them (for all of six minutes) as they experience friendship, hunger, love and loss on the hot, dusty streets of Egypt. This short short film with a buoyant spirit received the Here Media Award and Symbolic Diversity Award.

Spread Peace among You is modern and upbeat. Souheib Dhiffalis film presents a young man who travels around displaying a simple piece of paper. His journey illustrates how one small message or one brief, kind gesture can change everything.

War Child by Iraqi Ali Alazeez is shot in grainy neutrals and is stark in its depiction of a young boy who is quite literally born into war. The boy is then orphaned and navigates his way around the city with little else but a shared meal with another orphan, a flattened cardboard box to sleep on at night, and thoughts of tomorrows in his head.

Its not all war and poverty, though. After all, we are increasingly a global community with shared ideas, hopes, and troubles. In the film Social Suicide, Mahdi Khmili confronts an issue which transcends countries and peoplebullying. The 18 year-old Tunisian artist wrote, directed, and stars in the short. It was the winner of both the Seattle Award and Best Short Movie award.

The film begins in a sterile, clean, modern (but dark) hotel room. We watch as one actor (Khmili) sits on the side of his bed while listening to rhapsodic music as he, empties his pockets, and says goodbye to it all.

I started writing stories when I was sixteen, says Khmili. Stories based on my imagination and also some true events. He believes filmmaking is a gift, a very powerful way to make a difference in the world.

I have a dream and Im doing my best to make it come true, which is winning an Oscar, says Khmili.

The idea for Social Suicide struck when Khmili noticed friends and relatives attached to social networks, and taking it very seriously. I tried to look desperate, a loser, a very sad person to reflect the reality of 1.73 billion worldwide social network users, he says. Even though social sites like Facebook and Twitter connect people on a grand scale they have a dark side, too. With this type of technology its not unusual to live a double life or fall victim to cyberbullying.

It became a vital need in lifeor lets say life itself! says Khmili. We are losing ourselves in this cyber-world. And most dangerous of all we are losing lives because of it.

Dr. Zainab Al-Suwaij, director and co-founder of the American Islamic Congress (AIC), said the quality of this years films were different from years past: [They were] Much more open, more in touch with reality, she says.

I feel that before, when we used to get the films you could tell theres a big story, but the person who does it, the producer, is very cautious givengovernment restrictions; they are sometimes afraid of dictators or breaking certain rules, or traditional or cultural laws.

But she says that this years entries were brave and hopeful. She attributes this shift to the political and social changes happening in many Middle Eastern countries. As she puts it: a lot of spreading of democracy.

Eye to Heart co-chair JJ Mckay agrees. The movies this year are, for lack of a better word, more real, he says. You can tangibly feel they were sharing something about how their life is today, and the hope for and steps needed to move to tomorrow.

Hope is a heavy word when placed in the context of orphans, regions fraught with wars, and a world that is moving at a frantic pace. Theyre starting to, I think, internalize the changes in their society, say Mckay.

Mckay a business consultant and socialite, was inspired to join the international project. My father was a marine killed in Vietnam, and in the love letters he wrote to my mother he talked about the importance of democracy, and the importance of people having rights. For me, this is an extension of what my fathers dreams and hopes were.

Al-Suwaij has worked in 14 countries in the Middle East and North Africa, pioneering for human rights and helping to engage women in reclaiming their rights. She talks proudly of working with youth, encouraging them to be positive members of their communities.Last year when the films showed in Iraq, there were two explosions in one day and still more than 800 people turned out to the event. And the next day we had about 600 or so, says Al-Suwaij .

Its something new, excitingin most of these countries changes are happening every single day. At the same time you have the young people engaged and this is homemade filmthey have very little equipment. But they want to talk about an issue.

Money from Eye to Heart helps to expand the festival across the Middle East and provide greater viewership. Proceeds benefits other AIC programs, as well.