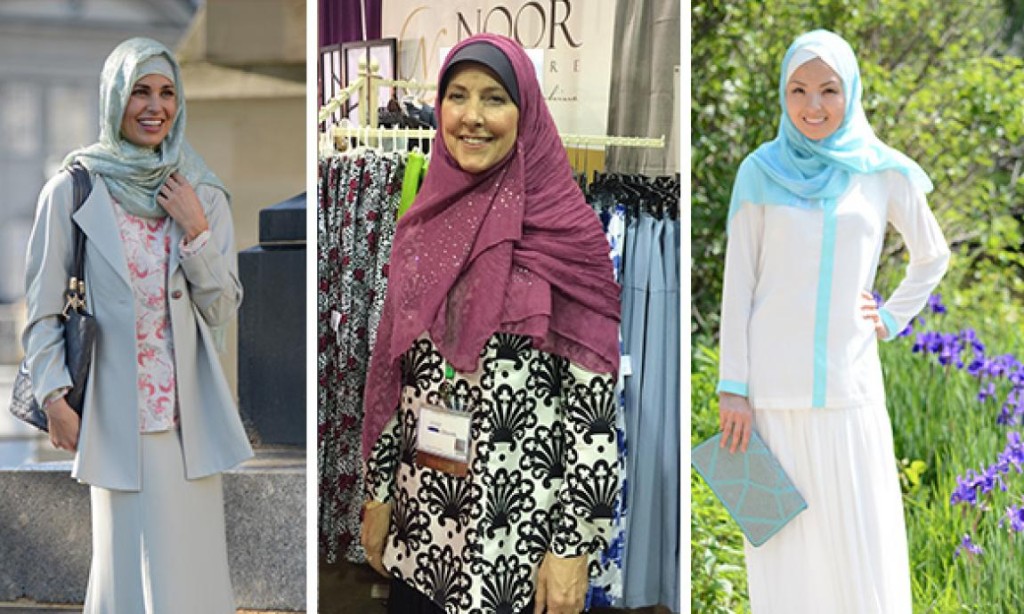 Noor Church designs modest business and professional suites for women under Noor Couture. Noor in Arabic means light. And light is a significant phenomenon in her life. Noor chose the name after she converted to Islam. We sat down with her to talk about her latest fall fashion designs, her inspiration, and some of her favorite moments in life.

Goltune: Tell me about Noor Couture?

Noor: When I first started Noor Couture, it was really in response to a lot of requests from friends and family who would notice what I was wearing. People were asking me where they could get those clothes. And I would say, Well, I made it. I got so many requests for my clothing that I thought maybe I should just start making it on a business scale.

Goltune: How did it go?

Noor: I started out not really knowing much about the fashion industry at all. I started out with working with some pattern makers, until I finally got someone who understood the look I was looking for.

When I started out doing all that searching, I, originally, I ran out of money, and it turned out to be a very fortuitous thing to happen because I started thinking more, reevaluating what it was I really wanted to do.

Noor: My mother died of domestic violence. Her brother was drunk, and beat her. She went into coma and never came out of it. So, part of my desire to work with women cooperative goes back to my experience.

What I wanted to do was to have a womens collective that was being paid a fair wage and that they were in a comfortable working [space]. Because, I think, otherwise it would not be halal. The money would not be halal for me.

What I have now in the works is starting womens cooperatives in Pakistan and Bangladesh, and Im hoping that will be completed by January of 2016.

Goltune: What is Noor Couture about?

Noor: I want to provide modest clothing for Muslim women that are up-to-date. Its stylish. Its something that they would be proud to wear to work; that they would feel comfortable and good in it.

Goltune: Where does your Inspiration come from?

Noor: It can come from looking out the window. It can come just from seeing a certain color. Often, I find that a lot of my ideas come while Im in a state of prayer. Theres a part of your mind that never really opens when youre so busy with business details or working on technicalities of a pattern or choosing fabric. Theres just a part of your mind that is very open and receptive when youre in prayer.

Noor: Oh god. Thats like asking me my favorite color. I mean there isnt just one. Yeah. I have to say theres something about my personality where I tend to try as much as possible for these sensory things, to live in the now. And, not to try to compare it with something that happened in  the past because I think it can rub you off the fullness of what youre experiencing right now.

So, I will say I have a terrible sweet tooth that whenever Im invited to potlucks Im always asked to bring the dessert. I dont eat meat, except for fish, so Im almost vegetarian. But as far as food is concerned, if you asked me what some of my favorite moments in life, I could tell you, but

Goltune: So, tell us about your favorite moments in life?

Noor: I remember when my oldest son was about a year old; I was holding him and his head was resting on my shoulder; I was rocking him; the sunlight was coming down. There was this large picture window and the sunlight was coming down through of all these leaves. And it was just this feeling of peace with him and this quality of light. He is 33 years old now, and I remember it like it was yesterday.

Goltune: Any other favorite moments?

Noor: I remember my mother coming to my bedside when I was probably about 5 years old. She sat down, and she put her fingers through my hair. And she said, Do you know how much I love you? And I remember looking at her.

Noor: I like all sorts of music, except I dont really like rap music, and I dont like heavy metal. I dont like discordant music, but I like opera. I like jazz. I like symphony. I like rhythm and blues and heep hop and all of that I find pleasing to the ear. I would say that I have more artistic DNA. Im a potter. I make pottery and a calligrapher.

Noor: If somebody right now tell me that I could go anywhere that I wanted to go, I would have gone on Haj [Muslims holy pilgrimage to Mecca]. I mean, thats a burning desire. I have not been on Haj yet. But, thats not exactly a vacation. Its more like a spiritual journey.

Noor: I do sometimes up in my own home I do Pilates. I also ride bicycle, and I do enjoy it, and I dress modestly when I do it. And lets see what elsehiking, bicycling, and then really, just walking, taking walks. And thats for the physical part of it, but also, I try to be mindful of what I eat. But its very difficult when you have a sweet tooth.

Noor: I dont watch TV, or talk shows. I find them almost repugnant. I find them very irritating. My kids grew up without a TV actually. I remember one of their teachers calling me and she said, Well, I had assigned the children to watch a news segment on TV and to write an article on it, and your son didnt do his homework. she said. We do not have a TV, I said. She was silent for about 30 seconds, then she said, AhSo thats why hes such a good reader.