Several Iranian women disguised themselves to men to sneak into Iran’s football stadium.

Donning beards and wigs, they disguised themselves as men so they could watch their team, Persepolis, play rivals Sepidrood at the Azadi stadium in Tehran last Friday.

Images of the women at the stadium have been widely shared on both Persian and English social media.

Women have been punished for attending games in the past. In 2014, British-Iranian activist Ghoncheh Ghavami was detained after attempting to watch a men’s volleyball match in Iran. And in March 2018 35 women were detained for trying to attend a football match.

In February, women were allowed to watch a major basketball game in Tehran – but they had to sit in an area separate to men.

For one of the women pictured, it was the third time she had pulled off the trick. 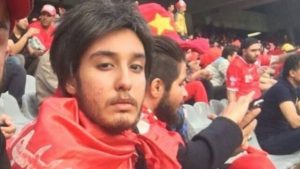 “I ‘googled’ for different make-up [tutorials] and learn new ways and apply them to go to the stadium,” she said.

She told the newspaper she had been stopped by security only once. She encouraged other women to get in touch and offered to train them in disguise techniques.