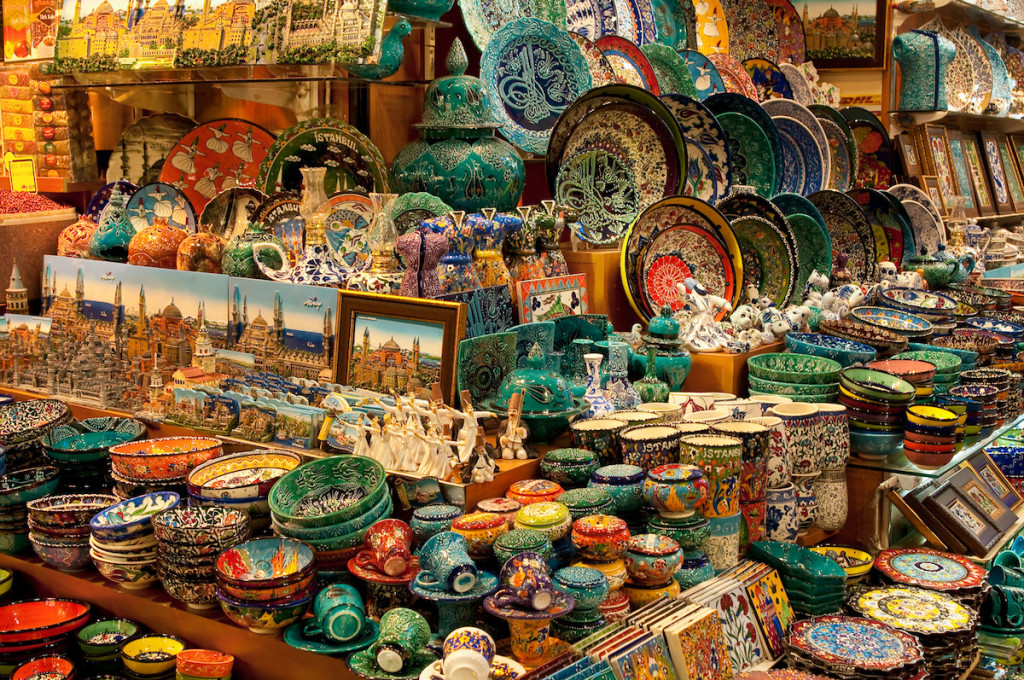 A thin line divides modernity and tradition at Istiklal Avenue, the most famous street in Istanbul, Turkey.

Roughly speaking, more than 3 million people visit the 1.4 kilometers (less than one mile) street in a single day during weekends. But very few of them pass the line going from the modern space of the street filled with famous American-brand boutiques, art galleries, or night clubs to Galata, a historic space located at the northern shore of Istanbuls Golden Horn.

I was trying to kill time when my mom, sister-in-law, cousin and my brother were sacking the expensive shops looking for good deals.

Ranna, my 5-year-old was comfortably sitting in her blue stroller letting me to do my exercise of the day. When we reached the border, we decided to go to Turkeys historic past.

Only a few steps down , I could hear the beautiful, calming sound of Azan, the Muslim prayer calling. The sound of Allah Akbar, the god is the greatest, has always given me a sense of tranquility. It is a  sound I have forgotten in the US. I followed the sound and reached a small cozy blue mosque at the other side of the street. Men were getting ready to pray. It was Friday. I could see women entering their prayer area from a nearby gate. I paused and let Ranna watch the prayer, observe her mothers most important religious ritual.

It was a hot day and I knew my child was getting restless. A bit down the steep street I saw a shop selling fresh juice. There were a big pile of pomegranate, grapefruit, orange and grapes lying out voluptuously in front of the store.

We passed the narrow stone-carpet, one-way traffic street to the store. Forgetting that I must ask the price before I place an order in Istanbul, I ordered a cup of eight ounces of pomegranate juice from the boy, who looked 12 years old, behind the counter. He picked two large pomegranates, cut them in half, and playfully placed them in his extract machine. The cup was in my hand two minutes later.

Fifteen Turkish lira was about $7. The cup would normally cost $2.

By experience, I knew shop owners in Istanbul rip off tourists. But I would never expect a 12-year-old boy, in the light of the sun, would lie to my face–a woman speaking his own language. Obviously, I was not doing a good job in speaking Turkish.

I only had 20 lira bills in my wallet. I handed one of my precious 20 liras, got back 5 and left the store. What was more painful– my kid didnt want to drink the juice. It was sour in her taste.

Still trying to recover from the cheating experience, I walked down the popular street when a beautiful green tiny mysterious alley attracted my attention. I stood at the entrance gate looking inside the alley, enjoying the view when Ranna ran into the space. I ran after her to collect her.

While managing her toward the exit, I saw a naked statute at the end of the alley. The figu
re seemed so real. Her breasts and crotch were barely hidden with a light transparent red cloth. I didnt know why I was shocked. May be I didnt expect to see a naked statute after hearing Azan just a few minutes ago.

When I turned around to come down, I saw a blue door right above three large steps. A pamphlet by the door grabbed my attention. It was written in English. A picture of an older man on the pamphlet reminded me of my old Jewish friend in Seattle.

I collected Ranna and we came down the tiny mysterious tunnel.

Right by the alley, there was a spice souvenir shop. We went inside to buy presents for my American friends.  I was browsing different boxes and gift sets when a tall, handsome gentlemen approached me. We started speaking in Turkish.

What is it Mustafa again, a soft old masculine voice called to the man from my back in Turkish. Are you flirting with an American again?

I turned and saw a gentleman. His face was utterly familiar. I knew I have seen his face somewhere. I was staring at him. How are you madam? he said.

You are Habib Gerez, I said. I saw your picture at the door by your gallery.

I told our story about visiting his alley by accident. I love to see your paintings, I said. OK, this way, he headed toward the door.  What about Saffron boxes madam? the young philosopher asked. I will be back Mustafa. And you are going to sell them to me for 5 lira.

I grabbed Ranna and followed Habib Gerez to his cozy mysterious alley.