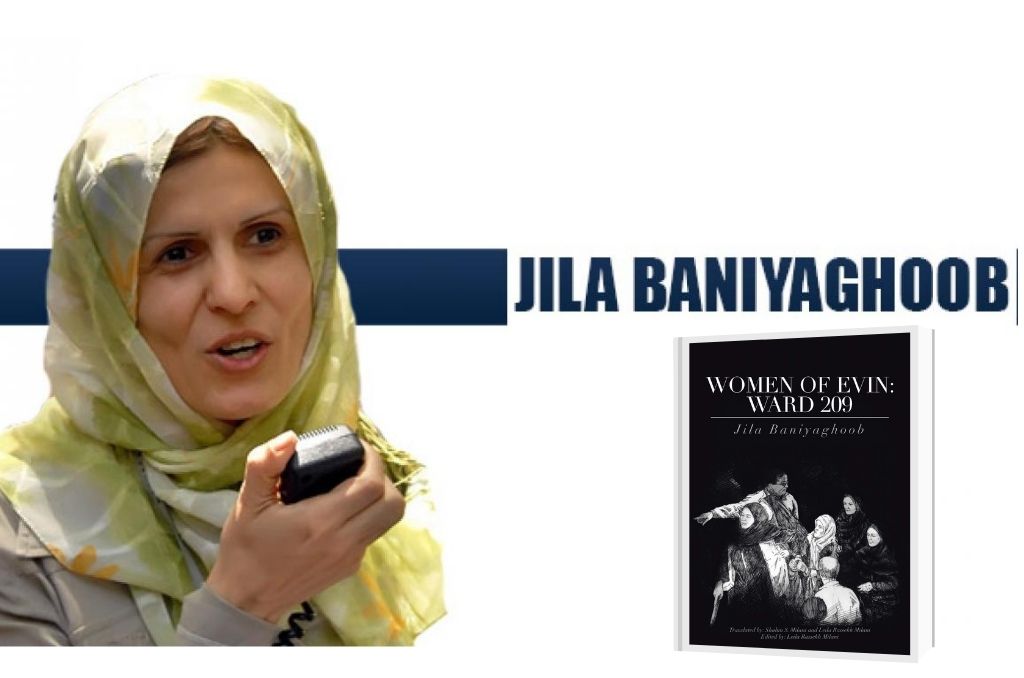 This article is reposted to honor Friday, June 26th, the United Nations International Day in Supporting Victims of Torture.

In September of 2013, Iranian President Rouhani granted amnesty to 12 political prisoners as he made his way to an annual session of the United Nations General Assembly. But Jila Baniyaghoob, former Evin prison inmate and 2009 IWMF Courage in Journalism Awardee, cautions this isolated act does not signify democratic momentum.

“We heard a lot of noise, inside and outside of Iran,” she said. “But we have more than one thousand political prisoners. The judiciary officials have promised the release of more than 80 prisoners, but there is no follow up news. Chances are, they may never be released.”

“I feel so sorry that my book couldn’t be published in Iran and that Iranians are deprived of reading it.”

Determined to keep the international community vigilant, Baniyaghoob published a memoir, chronicling the time she spent inside Tehran’s Evin prison for her work as a journalist. An interview with the author reveals that Women of Evin: Ward 209 is more than a detailed account of the physical and emotional tortures she endured for giving voice to Iranian women. This book is a symbol of resiliency that took a great deal of determination and courage to complete.

Baniyaghoob’s long-standing reputation as a voice for women’s issues – namely as editor-in-chief of a website called The Center for Iranian Women (Kanoon Zanan Irani) – has constantly placed her at odds with government officials. Beatings, blindfolded interrogations and solitary confinement became occupational hazards for covering public protests.

Officials first subjected her to the harsh conditions at Evin prison in 2006, then again in 2007. She gathered material for her memoir during these detentions. But, had to commit her notes to memory because she wasn’t able to avoid her persecutors for long. She and her husband, journalist Bahman Ahmadi Amoui, were detained again in 2009 and 2012.

In 2013, Baniyaghoob released her memoir, Women of Evin: Ward 209.  shortly after she was freed. Her testimony runs counter to the image of leniency that president Rouhani is trying to project. Having suffered from the unhygienic conditions inside Evin prison, she writes about the unsanitary water, filthy toilets and cold cells that await those who raise their voice against the government.

Beyond the physical abuses, Baniyaghoob documents how the Iranian Intelligence Ministry officials at Evin prison employed psychological abuse tactics as well. They deprived her of sleep, subjected her to routine interrogations and found sport in giving her false hope over being set free.

In spite of these hardships, Baniyaghoob still considered her voice her most powerful tool. Pouring her remaining energy into her memoir, she hopes to bring the true plight of political prisoners in Iran to the attention of the international community.

Due to a restrictive political atmosphere in Iran, she was forced to publish her book abroad. She published the Farsi version in Sweden, making it widely available to the Iranian diaspora population. The English translation was published in the United States. But she doubts her book will ever be published back home.

“They knew they would torture me with such a verdict.”

“I feel so sorry that my book couldn’t be published in Iran and that the people of my country are deprived of reading the book,” she said.

While having to sidestep Iranian authorities posed a challenge, Baniyaghoob says it only took her about six months to write, revise and publish her memoir.

The greater obstacle, she explained, was keeping track of all that happened in prison without pen and paper. Above all else, she struggled with finding a way to expose the realities of life inside Evin prison without compromising the safety of her inmates.

“I didn’t want to attract unwanted attention to them,” she said. “In some cases, I had to change their names or drop them from my story altogether.”

She may have felt the need to self-sensor certain details, out of ongoing security concerns, but she confided that the process of writing her memoir did offer some sense of relief and resolution.

“I felt better after finishing each page,” she said. “And when I hear that a person or a group of people have read my book, I feel a sense of appreciation and gratitude.”

If it were possible, she’d like to get her book in the hands of some of the female prison guards that she tried to strike common ground with while under their watch. Baniyaghoob felt they simply feared what they did not understand: their right to gender equality.

“I feel if they would read my book, they would understand our world and maybe rethink the way they treat us,” she said.

Prohibited from Practicing Journalism in Iran

Her memoir has not yet sparked any major acts of retaliation from the Iranian government. Baniyaghoob seems to think this has something to do with the fact that her book hasn’t yet garnered enough international attention. She’d like to do more to promote her book, but she’s also currently focused on advocating for her husband’s release and lifting her 30-year-ban on practicing journalism.

Her husband spent three years inside the notorious Evin prison. Then he was transferred to another prison outside of Tehran, where Baniyghoob reports that his health and hygiene situation is far more critical.

“He is getting weaker each time I see him,” she said, lamenting the physical distance that now separates them. “But he still maintains his humor and sanity. In our meetings, he tries to laugh and make me laugh.”

Even though she is no longer in prison, her life is still very much tied to the whims of those in power. In Iran, her memoir has afforded her little leverage. She is hesitant to write anything that may further aggravate her husband’s captors. She is worried that she may never be allowed to practice journalism in Iran again.

Her prosecutors knew that they would cause Baniyaghoob more harm if they banned her from journalism altogether, rather then imprisoning her for what she wrote.

“They knew they would torture me with such a verdict,” she said.

This admission speaks to the incredible power of story. Baniyaghoob is hoping that her memoir serves as a catalyst for political reform in Iran. In the meantime, she finds cause to celebrate small victories.

Speaking of female prisoners of conscience who remain inside Evin prion, she said, “Their pain has been documented by me to be voiced for others to know. I hope I inspire them to write their own memoirs.”