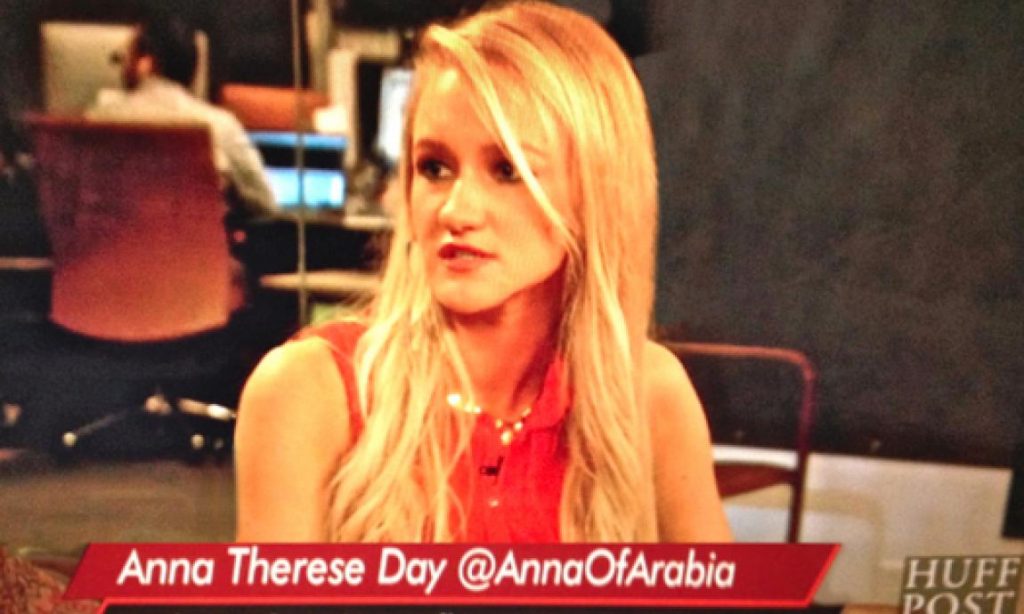 The Arab Spring propelled Anna Therese Days career forward in a way she never could have anticipated. She started out studying Arabic in Cairo as a foreign exchange student from the University of Wisconsin-Madison. Here, she connected with young activists who were against the U.S.s military involvement in the Middle East.

When the Arab Spring exploded, she began working as a fixer by connecting broadcast reporters with the English-speaking revolutionaries she had come to know during her studies. Before long, Day was live-Tweeting events and tackling her own reporting assignments for national publications like Huffington Post.

In 2013, she used her connections to write an exclusive feature for The Daily Beast that demonstrated female reporters are fully capable of interviewing men about politics and war in the Middle East. In her story, Dining with Al Qaeda, she interviewed four male, Western-educated, Al-Qaeda affiliated fighters inside Syria.

In this segment, I asked Day to reflect on how her gender impacts the types of stories she is able to access.

Luhmann: Are there various obstacles you face in being a female reporter on issues in the Middle East? Its a lot of socially and politically charged material that youre reporting on and I think its safe to say, even in the U.S., these spaces are often dominated by male reporters.

Day: I think for me, when it really clicked was when I decided to turn my weaknesses into strengths. Your youth and your gender are things that debilitate your professional expertise. Theyre things someone can use to undermine you and I decided I wasnt going to let that happen. I was going to make this an expertise of mine and thats what I did. Thats how I started really developing something that would make me competitive.

Of course, sometimes, youre met with skepticism, as I think you should be if youre a Western feminist woman coming into these countries. But, in general, I think theres a lot of room for collaboration in a way that I think can be healthy.

Luhmann: As an outsider  a Westerner, a woman  how do these things grant you unique access to people and stories in the Middle East?

Day: In many Middle Eastern countries, Im able to access domestic spheres in a way that my male peers arent. Again, I want that to be a strength. I want to take advantage of these kinds of openings and opportunities that my gender gives me a competitive advantage for.

Still, when I hear men saying, You have this advantage, Im like Give me a break. Because in most scenarios Im fearing sexualized violence and theyre not fearing that in the same way I am.

Luhmann: What do you mean?

Day: Ive been really, really lucky. But at the end of the day, everythings okay until its not. A womens safety is not a reality anywhere in a conflict situation.

Unfortunately, I think most women who have worked in a place like Cairo have experienced absurd sexual harassment and threats that you wouldnt wish on your worst enemy. Again, while women journalists stick out, unfortunately, in Egypt for example, all Egyptian women are experiencing that kind of harassment. I guess Im not giving you a specific example, but I guess I dont want to go into some of the stories because they are upsetting.

Luhmann: Its a tough topic to talk about, for sure.